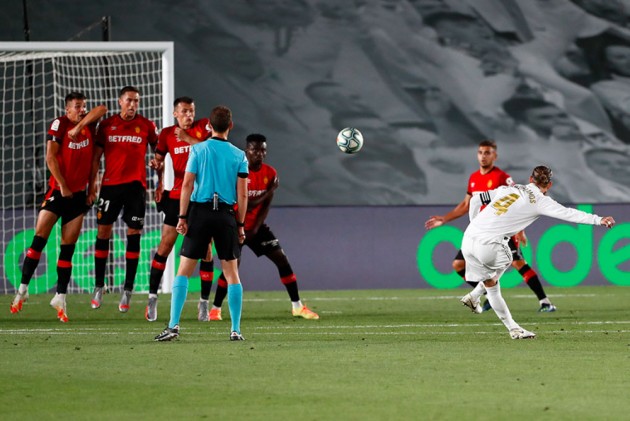 Ramos curled a stunning set-piece past Manolo Reina as Madrid returned to the top of LaLiga thanks to a comfortable 2-0 win over Mallorca on Wednesday.

After Vinicius Junior's 19th-minute opener, Madrid captain Ramos showcased his set-piece ability 11 minutes into the second half at the Alfredo Di Stefano stadium.

Ramos took his season tally to nine goals, becoming the first defender to score eight or more goals in a single LaLiga campaign since Ezequiel Garay in 2006-07 and Zidane hailed the Spain skipper.

"He's been looking for a free-kick goal," Zidane said after the match in the Spanish capital. "He's worked on it a lot in training.

"He's our leader, our captain and he always leads the way."

Madrid reclaimed top spot after LaLiga's return this month due to Barca's 0-0 draw with Sevilla last Friday, after which Pique suggested it would be hard to stop Los Blancos winning the title because VAR and referee decisions too often go their way.

Ramos said people "shouldn't be imagining things" after Madrid moved back to the summit due to their superior head-to-head record.

Zidane, however, was reluctant to add to the controversy following Madrid's fourth consecutive win since the coronavirus-enforced postponement.

"I'm not going to get involved in these things," Zidane said. "Ramos has already spoken.

"I have my own views. We have to rest and think about the next game."

Madrid will travel to Espanyol on Sunday in round 32 of the competition and Zidane added: "I'm sure it's going to be difficult until the last game."