While his contract situation at Real Madrid makes headlines, Sergio Ramos continues to be crucial for Spain and Luis Enrique 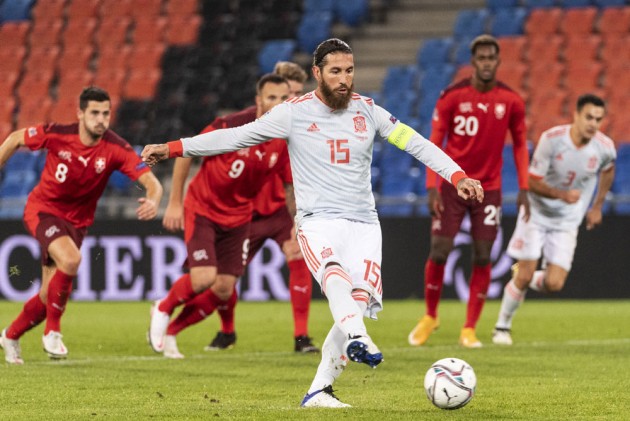 Sergio Ramos can handle talk over his future at Real Madrid and has not allowed his contract situation to affect him while playing for Spain, according to Luis Enrique.  (More Football News)

Defender Ramos is in the final year of his deal with Madrid and negotiations between the two parties have reportedly stalled, leading to speculation he could be set to depart the Santiago Bernabeu.

Paris Saint-Germain have been linked with the 34-year-old, who pulled out of the scheduled national team news conference on Monday, Manchester City midfielder Rodri stepping in to replace his captain.

Ramos is preparing for Spain's pivotal Nations League clash with Germany on Tuesday, a game they must win if they are to leapfrog their rivals and qualify for the finals of the tournament.

Head coach Luis Enrique has backed the centre-back to cope amid the growing pressure, something he has become accustomed to during his distinguished career for club and country.

"Everything that is generated around Ramos is neither new, nor old, nor is it anything," the Spain boss told the media.

"It is what it is and what it means to have a player of this level. It is normal that there is pressure around and you have to live with that.

"If there is someone with enough experience to handle this personal situation it is Sergio Ramos.

"He is well prepared, and I see him the same as the first day we arrived at the national team, his enthusiasm, his leadership. His face does not change at all and this is part of the things that a footballer should know how to carry."

3 - Luis Enrique is the first  Spain  manager to be winless in three international games in a row in this century (D2 L1). Blocked#SwitzerlandSpain #SuizaEspanapic.twitter.com/Gjl7fPw8gk

Spain were only able to draw 1-1 away in Switzerland last time out, not helped by the usually reliable Ramos missing two penalties.

Luis Enrique defended the player – who had scored his previous 25 attempts from the spot for club and country – in his post-match media conference, though it was again a topic of debate in Monday's preview session for the game in Seville.

"I don't know if Sergio Ramos is the best penalty taker in the world," he replied when asked about Ramos' spot-kick role.

"What I did defending Sergio after the game is what any coach would do of course. You have to know how to accept both versions of the story and nothing happens."

Ramos has played the most number of games (16) during Luis Enrique's time in charge, during which he is the leading scorer with nine goals.

He is also top of the charts across the same period when it comes to shots attempted (37), passes attempted (1,328) and also duels won (64), showing his all-round value to the team.