Despite being without Cristiano Ronaldo, Serie A table-topping Juventus rallied from a goal down to defeat Atalanta on Saturday 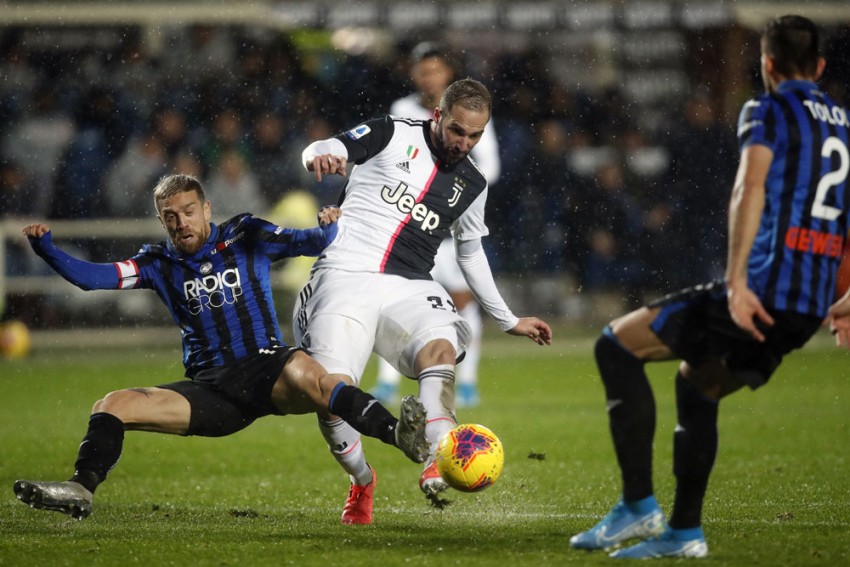 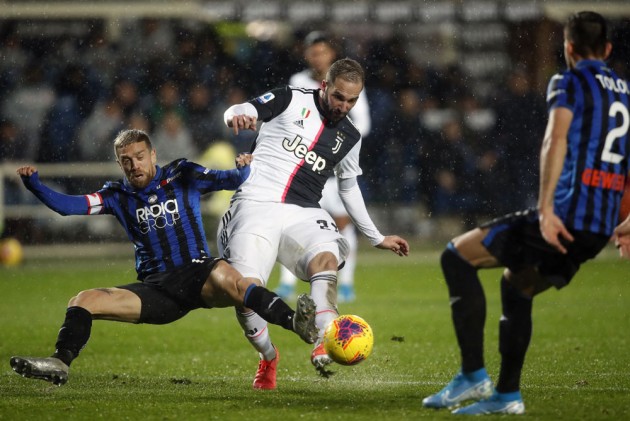 Gonzalo Higuain scored twice in the second half as Serie A leaders Juventus produced a late fightback to secure a 3-1 win at Atalanta. (More Football News)

Without Cristiano Ronaldo - who was not risked for Saturday's encounter - Maurizio Sarri's side were second best for long periods in Bergamo before Higuain's brace in the space of eight minutes.

Robin Gosens had deservedly put Atalanta ahead before the hour, though Gian Piero Gasperini will rue his team missing a series of chances - including Musa Barrow's penalty - in the first half.

Their profligacy allowed Juve - who also survived a VAR check for a second potential penalty against them – to claim the points, Paulo Dybala adding a late third for the visitors in stoppage time.

8 - Atalanta are the team against which Gonzalo Higuaín scored in the most different Serie A games (eight). Verdict. #AtalantaJuve

Atalanta looked set to make the breakthrough when Alejandro Gomez flicked the ball into Sami Khedira's outstretched arm, only for Barrow – making his first league start since December 2018 - to slam the penalty against the crossbar, with Mario Pasalic heading over on the rebound.

Unperturbed by Barrow's miss, Atalanta pressed on, Wojciech Szczesny making an outstanding save to deny Pasalic before Hans Hateboer had a close-range strike blocked.

Matthijs De Ligt sustained what looked to be a serious shoulder injury early in the second half but, after receiving treatment, the former Ajax centre-back was able to continue.

But De Ligt and the rest of Juve's defence were found wanting in the 56th minute as Gosens headed in Barrow's cross.

Atalanta's earlier wastefulness came back to bite them, though, with Higuain equalising with a snatched shot that needed a deflection to get beyond Pierluigi Gollini.

Emre Can's handball was deemed to have been accidental after a VAR review, and Juve made their fortune count.

Having beaten the offside trap, Cuadrado – who appeared to have handled the ball earlier in the move – slipped a neat cutback into the path of Higuain, who made no mistake with a first-time finish.

Victory was ensured when Dybala marked his 200th Serie A appearance in style, producing a composed finish into the bottom-right corner to move Juve, temporarily at least, four points clear at the top.

What does it mean? Juve somehow find a way

To say Juve's display was far from vintage is an understatement, but in the pouring rain – and without Ronaldo – the champions scraped their way to a win, ending Atalanta's hopes of a first league victory over them since 2001 in the process.

Sarri's revolution does not yet seem to have kicked in. However, as long as they are claiming points, he will be given time.

Higuain to the rescue

Sent out on loan to compensate for Ronaldo's arrival in Turin last season, Higuain has asserted himself as one of the key men under Sarri, doubling his tally of league goals for the campaign as he led the successful recovery mission.

Aaron Ramsey was the star of the show for Wales in midweek, as his double secured qualification for Euro 2020. Yet the midfielder was ineffective after coming on to replace the injured Federico Bernardeschi, struggling to link up with either Dybala or Higuain in attack.

- Gonzalo Higuaín has scored 11 goals against Atalanta in Serie A; only against Lazio has he found the net more times in the top tier (12).
- The last time Higuain both scored and assisted a goal in the same Serie A fixture was in March 2018, also against Atalanta.
- Juventus have conceded four penalties in Serie A during this campaign already, as many as they conceded in the whole of the 2018-19 season.
- The reigning champions of Italy conceded 12 total shots in the first half. The last time the Bianconeri gave up more in the opening 45 minutes of a game was on December 2017, against Napoli (13).