Inter Milan, riding high with a perfect run of six wins, play at home to the defending Serie A champions Juventus, who are two points behind, on Sunday. A win would allow Inter to move five points clear of Maurizio Sarri's second-placed champions 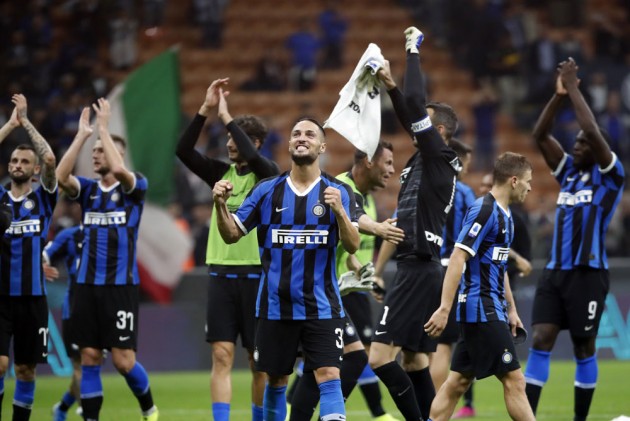 Antonio Conte warned Inter Milan were angry at their defeat to Barcelona and ready to fight to maintain their Serie A supremacy against his former club Juventus in this weekend's top-of-the-table clash at the San Siro. (More Football News)

Inter, riding high with a perfect run of six wins, play at home to the defending champions, who are two points behind, on Sunday.

"We are hurting," said Conte after falling to a 2-1 Champions League defeat in the Camp Nou despite Lautaro Martinez's second-minute goal.

"There is bitterness and anger at the result. All we can do now is lick our wounds and prepare for Sunday's match, but I saw courage and character."

Conte, 50, knows his rivals well having coached Juventus to the first three of their current run of eight titles, before going on to coach the Italian national team followed by two seasons at Chelsea.

Meanwhile, Juventus have been boosted ahead of the 'Derby d'Italia' after with a confident 3-0 win over European rivals Bayer Leverkusen.

Inter Milan forward Romelu Lukaku remains doubtful, however, after a minor thigh injury ruled him out of the trip to Spain.

Lukaku has scored three goals in his first seven games since moving from Manchester United.

It will be the 200th time both clubs have met in the league with Inter's last win coming three years ago in the San Siro.

Last season Juventus won 1-0 at home with both sides settling for a 1-1 draw in the reverse fixture in April with Cristiano Ronaldo scoring his 600th career goal.

Behind in fourth, Serie A runners-up Napoli face a tricky trip north to Torino, who are desperate to avoid a fourth defeat in seven games.

Troubled AC Milan travel to Genoa with the future of both clubs' coaches on the line.

Marco Giampaolo's Milan are 16th, one point above the relegation zone, after losing four of their first six games, with Aurelio Andreazzoli's Genoa third from bottom.

Lazio head north to Bologna where they are unbeaten in their last 12 games.

Fans from both clubs are planning a pilgrimage to the Sanctuary of the Madonna of San Luca overlooking the city, for Bologna Sinisa Mihajlovic, a former Lazio star player, who is battling cancer.

City rivals Roma host Cagliari with the Sardinians on an unbeaten four-game run but without a win over the capital side since 2013.

Meanwhile, Sassuolo's scheduled game on Friday against Brescia has been postponed following the death of long-serving club owner Giorgio Squinzi, at the age of 76.

Juventus forward Gonzalo Higuain has hit top form on his return to Turin after loan spells at Chelsea and AC Milan. The 31-year-old Argentine is helping implement the style of Sarri, who he played under at Chelsea and during the best season of his career in Napoli.

Higuain got back on the Champions League goalscoring charts against Bayer Leverkusen, and set up Federico Bernardeschi's second.

"We are only at the beginning of the season, but this will be a game that can have an impact on the competition," said Higuain of Sunday's game.

76,000 - Fans who will attend the sold-out 'Derby d'Italia' 199 - The number of times Juventus and Inter Milan have played each other in the league 57 - Goals Gonzalo Higuain has scored in 112 games for Juventus 3 - Antonio Conte's seasons as coach of former club Juventus, the longest he has spent with any team 2 - AC Milan's wins in six games this season.