The defending champion Inter Milan cut the gap on Napoli and AC Milan to four points after 13 rounds and ended Napoli’s status as the last remaining unbeaten team across Europe’s five major leagues. 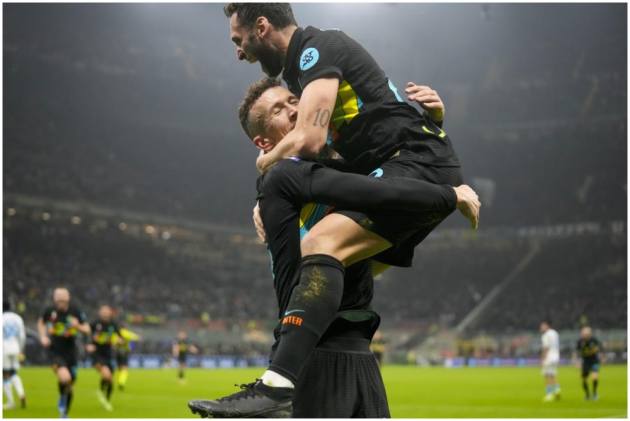 And then there were none. (More Football News)

Serie A leader Napoli lost for the first time this season as Inter Milan reinvigorated its Italian title bid with a 3-2 win on Sunday.

Inter, the defending champion, cut the gap on Napoli and AC Milan to four points after 13 rounds and ended Napoli’s status as the last remaining unbeaten team across Europe’s five major leagues.

Dries Mertens, who had set up a pulsating finale with his club-record 137th goal for Napoli, missed the chance to equalize in injury time when he blazed his shot over.

“It was a very tactical match and we could have drawn it in the end,” said Napoli coach Luciano Spalletti on his first return to the San Siro in Milan since he was fired by Inter after finishing fourth in 2019.

It was another Argentine who scored the winning goal. Lautaro Martínez scored Inter’s third on a counterattack in the 61st minute, set up by compatriot Joaquín Correa.

Inter goalkeeper Samir HandanoviÄ preserved the result with a brilliant save to deny Mário Rui in injury time, forcing the ball onto the crossbar, before Mertens’ miss.

The visitors had struck first in the 17th when Piotr Zielinski won the ball off Nicolo Barella and ran forward to score from Lorenzo Insigne’s pass.

Hakan ÇalhanoÄlu equalized with a penalty in the 25th, awarded after Kalidou Koulibaly was penalized through VAR for hand ball, and Ivan PerišiÄ headed Inter’s second before the break.

There was a lengthy delay early in the second half following a clash of heads between Napoli’s Victor Osimhen and Inter’s Milan Skriniar. Osimhen was unable to continue and went off with what looked a cheekbone injury.

Martínez scored but Mertens ensured a lively finale when he pulled one back in the 78th with a brilliant shot under the crossbar.

There was another holdup for another clash of heads, between Ospina and Inter striker Edin DÅ¾eko. Both continued with bandaged heads to see the late drama.

Roma coach José Mourinho was facing the prospect of a third straight league game without a win until he brought on Felix Afena-Gyan at Genoa.

The 18-year-old Afena-Gyan scored twice in a 2-0 win to lift Roma to fifth and spoil Andriy Shevchenko’s debut as Genoa coach.

Hampered by injuries and coronavirus infections, Roma failed to impress until Henrikh Mkhitaryan set up Afena-Gyan for the breakthrough in the 82nd. Afena-Gyan drilled a low shot inside the far post, then sealed the win with a brilliant curling shot in injury time.

“I dedicate the goal(s) to everyone, to my family, to the fans, to my mother who brought me this far,” Afena-Gyan said.

Earlier, a penalty from Brazilian forward João Pedro helped Cagliari leave the bottom of the table with a 2-2 draw at Sassuolo.

Sampdoria’s 2-0 win at Salernitana left the promoted side bottom in Cagliari’s place.

Also, Nigerian forward David Okereke’s second-half goal was enough for Venezia to come away from Bologna with a surprise 1-0 win.