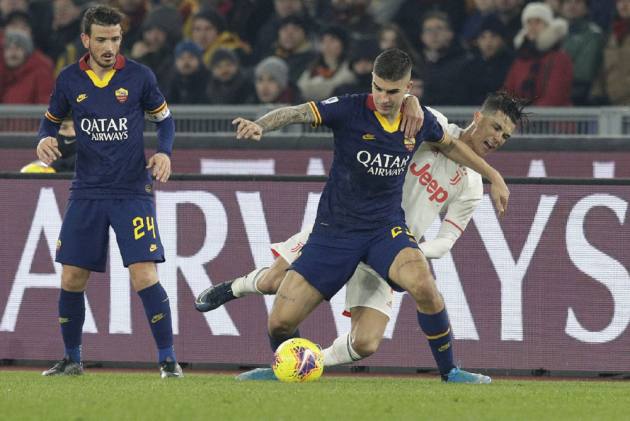 Two goals inside the opening 10 minutes helped Juventus leapfrog Inter at the top of Serie A with a 2-1 victory at Roma. (More Football News)

The Argentina international then won a penalty having dispossessed Jordan Veretout, with Cristiano Ronaldo converting to take his tally to nine goals in his past six Serie A games.

A second-half spot-kick from Diego Perotti proved to be a mere consolation for Roma, who also lost Italy international Nicolo Zaniolo to a serious-looking leg injury, as Juve capitalised on Inter's Saturday draw against Atalanta.

All over at the Olimpico.

Perotti's second half penalty got us back into it, but first half goals from Demiral and Ronaldo prove decisive.#ASRoma #RomaJuve pic.twitter.com/jNhM8qXh8j

The Bianconeri had not scored on their previous two trips to face Roma at the Stadio Olimpico, but they were ahead after three minutes through an unlikely source.

Dybala swung a free-kick in from the left and Chris Smalling was unable to clear, with Demiral sticking out his right leg to see the ball go in via his shin.

It went from bad to worse for Roma, who only had themselves to blame for Juventus' second as Dybala robbed Veretout on the edge of the box and won a penalty from the same man that Ronaldo dispatched.

The hosts thought they should have had a spot-kick themselves when Lorenzo Pellegrini's goal-bound effort appeared to hit Adrien Rabiot on the arm, which was tucked into his body.

An injured Demiral was replaced shortly after by Matthijs de Ligt, who cynically impeded Zaniolo's progress after a brilliant run to also end the Roma midfielder's evening prematurely.

A VAR review helped Roma find a route back into the match with 22 minutes remaining, though.

Edin Dzeko was unfortunate not to score when his effort struck the post, and the former Manchester City striker kept the attack alive by crossing for substitute Cengiz Under, whose header was blocked on the line by Alex Sandro before hitting the left-back's left arm.

Referee Marco Guida initially saw nothing wrong with the intervention but pointed to the spot after checking a pitchside monitor, with Perotti making no mistake from 12 yards.

Roma were unable to conjure up a leveller, though, and only a narrow offside decision prevented substitute Gonzalo Higuain from adding a third for the visitors.

What does it mean? Juve back on top

Juventus coach Maurizio Sarri had spoken positively of Paulo Fonseca and called Roma a "dangerous" opponent, but the visitors' start meant they were able to go back to the top of the table.

A two-point cushion at the summit may not be that significant at this stage, but Sarri will be pleased that his team are once again above Inter after four straight Serie A wins.

He might not be credited with either assist but Dybala's early brilliance put the reigning champions firmly in charge.

The Argentina striker provided an enticing ball for Demiral to open the scoring and it was his harrying that led to the penalty. It is hard to believe there were discussions about him leaving not so long ago - and that Sarri took him off 21 minutes from time.

Midfielder Veretout actually completed all 44 of his passes but it was his dawdling that allowed Dybala to seize possession, and the Roma man's subsequent foul that gave Juventus a penalty.

Veretout was fortunate another gaffe was not punished by Ronaldo later on, too, and it was no surprise he was withdrawn in the 66th minute.

Sarri's team entertain Udinese in the Coppa Italia last 16 on Wednesday before Parma, who are Roma's cup opponents, visit in the league. The Giallorossi's next game in Serie A is at Genoa on Sunday.