Inter saw off Sassuolo in Wednesday's rescheduled Serie A clash thanks to goals in either half from Romelu Lukaku and Lautaro Martinez. 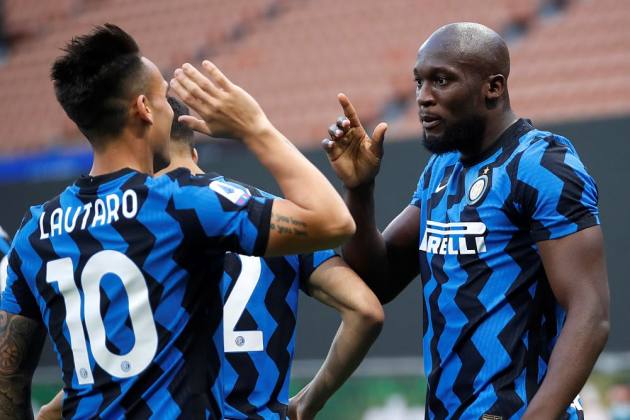 Romelu Lukaku maintained his impressive scoring run to help Inter to a 2-1 win over Sassuolo at San Siro that moves Antonio Conte's side 11 points clear at the top of Serie A. (More Football News)

The Belgium international scored for a fifth game running for club and country to open the scoring after 10 minutes and Inter did not look back in Wednesday's rescheduled clash.

Lukaku played in strike partner Lautaro Martinez for the home side's second and they held on for another win after Hamed Junior Traore had set up a nervy finale with a well-taken strike five minutes from time.

With this latest victory, Inter become just the second side in Serie A history - after Milan in 1989-90 - to win their first 10 games in the second half of a campaign.

10 - Inter are the first side to have won each of the first 10 Serie A games played in the second half of a season in the three points for a win era. March.#InterSassuolo pic.twitter.com/xUOHTN7d9I

Lukaku scored the only goal for Inter in their 1-0 win over Bologna last weekend and picked up from where he left off with Serie A goal number 21 of the season early on here.

Ashley Young sent in a right-footed cross from the left and former Manchester United team-mate Lukaku guided the ball into the far corner with a header from 10 yards.

Sassuolo were without a number of players through coronavirus concerns but would have been level if not for a fine Milan Skriniar block to thwart Jeremie Boga in the box.

The lively Boga tested Samir Handanovic the other side of the half-time interval as the visitors, who held Roma in their last match, started to pose more of a threat.

But Martinez gave Inter further breathing space by burying a low shot past Andrea Consigli once picked out by Lukaku on the counter.

Sassuolo felt Stefan de Vrij pulled back on the shirt of skipper Giacomo Raspadori in the build-up to Martinez's strike, but VAR did not feel the need to intervene.

Inter's win was not without a scare, though, as Traore curled a fine finish away from Handanovic following an Achraf Hakimi error, though there was to be no late leveller at San Siro.

What does it mean? Inter snap winless Sassuolo streak

Inter had only collected two points from their past five home league matches against Sassuolo in a winless run stretching back to September 2014.

Sassuolo put up more of a fight in the second half and ended the match with more possession (70 per cent to Inter's 30) and more shots (15 to seven), but the hosts were good value for an 11th successive home league win.

Inter are now on the brink of a first league crown since 2009-10 as they sit 11 points clear of stuttering second-placed side Milan with nine games to go, while nine-in-a-row champions Juventus - 2-1 winners against Napoli elsewhere on Wednesday - are a further point back.

Lukaku's early opener takes him to 27 for the season in all competitions for Inter, yet incredibly that was his first headed goal in the league since July 25 last year.

He had a late second ruled out for offside, meaning he scored from his only legal shot of the match and has now found the net in 11 of the Nerazzurri's home league games this season.

Inter were pretty comfortable at 2-0 up, only for Hakimi to make a mess of clearing a ball into the Inter box in the lead-up to Empoli-owned midfielder Traore's third goal in four matches.

That misplaced pass was a rarity for Hakimi on the day, however, as De Vrij and Matteo Darmian were the only Inter starters with a better pass completion rate than the full-back's 93.1 per cent (27 passes out of 29 completed).

- Conte's side recorded their lowest possession rate in a single Serie A match since Opta started to collect this data in 2004-05.

- Lukaku and Martinez have assisted each other eight times in Serie A this season, which is the most of any pair in the division.

- Young delivered his first Serie A assist since November 2020 (against Atalanta).

Inter will be looking to move another step closer to the title when they host Cagliari on Sunday, while Sassuolo travel to Benevento the following day.