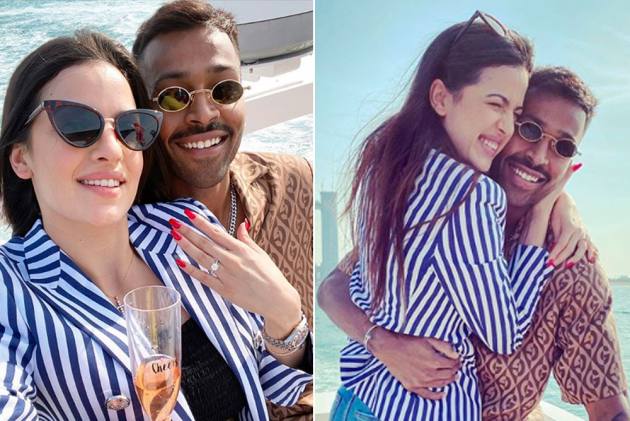 Barely 24 hours after confirming his relationship with Stankovic, Pandya on Wednesday announced his engagement with the Serbian actress via a social media post. (More Cricket News)

"Mai tera, Tu meri jaane, saara Hindustan (I am yours, you are mine and the entire nation knows it). 01.01.2020 #engaged," Hardik wrote on his Instagram profile where the couple were seen celebrating their engagement.

All-rounder Hardik Pandya got engaged to Mumbai-based Serbian actress Nataša StankoviÄÂÂÂÂ in Dubai on Wednesday,hours after making his relationship public.The 26-year-old shared pictures and a video,which showed the couple on a boat with performers singing B'wood song@hardikpandya7 pic.twitter.com/Pc4f2F5uv2

Pandya took to Instagram on the new year's eve (Tuesday), and shared a picture with his Stankovic: "Starting the year with my firework."

Rumours about Hardik dating Natasa have been doing the rounds of social media for quite some time. Natasa recently shared a photograph on Instagram.

Starting the year with my firework âÂÂÂÂÂ£ï¸ÂÂÂÂÂ

Natasa, 27, made her Bollywood debut with Satyagraha directed by Prakash Jha, in 2013. The Serbian has since appeared in popular reality TV show Bigg Boss.

Hardik last played for India in a T20I match against South Africa in September last year. After that, he underwent a surgery in London to treat his lower back problem in October.