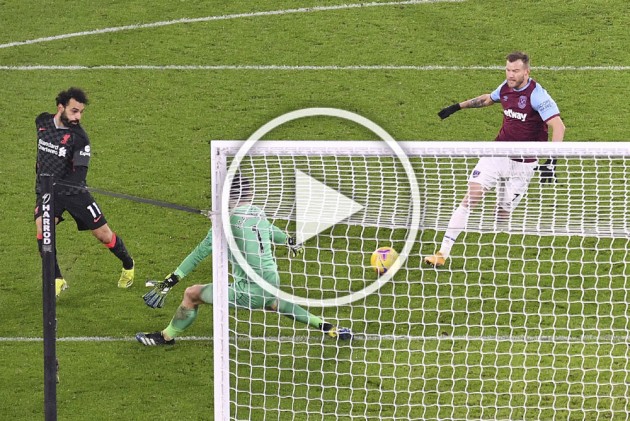 Mohamed Salah conceded he felt the extra responsibility to score for Liverpool against West Ham after starting without Sadio Mane and Roberto Firmino in the front three. (More Football News)

With Mane ruled out because of a minor injury and Roberto Firmino starting on the bench, there was extra onus on Liverpool's talisman to deliver the goods.

He did so in style, his second-half double putting Liverpool on course for a 3-1 win over the Hammers, moving the defending Premier League champions within four points of leaders Manchester City after playing a game more.

After curling home a 57th-minute opener, Salah then rounded off a sparkling counter-attack following wondrous passes from Trent Alexander-Arnold and Xherdan Shaqiri.

What a goal this was. The assist by Shaqiri is nearly as splendid as Mo Salah’s first touch ðÂÂ¥°pic.twitter.com/126mSR5qKZ

In doing so he became the first player to score 20+ goals in all competitions in four consecutive seasons for Liverpool since Ian Rush did so six times running from 1981-82 to 1986-87.

Salah has now been involved in 29 goals in his 21 Premier League starts without Mane, with his sparkling second goal his first from a fast break this season.

Reflecting the added pressure he felt, Salah's total shots (seven) were his most in the league since Liverpool's 4-3 opening win over Leeds United in September, while his four shots on target represented a season-high for the Egypt forward.

That assist and goal for our second...  pic.twitter.com/IVoLchaAIl

Asked about that weight of expectation, Salah told Sky Sports: "Before the game, I knew they were not going to start, I knew there was extra responsibility on me but not just now but every game, I try to help the team.

"Of course today they both didn't play, it was a big responsibility but I play without them before and we win also."

Since Salah's arrival in June 2017, Liverpool's win percentage in all competitions in games where Mane and Firmino have both started is 67 compared to 58 in games where at least one of that duo is not in the XI, though their goals per game tally (2.2) is equal.

Depending on the severity of Mane's injury, Liverpool may have to cope without him again next Sunday when they host City at Anfield in a huge clash, which comes four days after the visit of Brighton and Hove Albion.

On if it will need relentless wins to beat City and Manchester United to the title, Salah said: "If you want to win the league you have to win every game, but this year City were struggling in beginning.

"Then it was us struggling three or four games ago - you just need to keep winning if you want to win the Premier League."