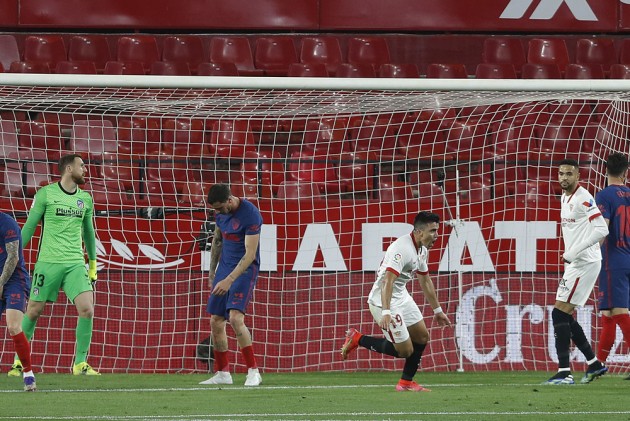 Atleti's lead could be cut to a solitary point if Barcelona beat Real Valladolid on Monday after Marcos Acuna's fine header handed fourth-placed Sevilla their first LaLiga win over the capital club since 2016.

Sevilla registered 12 attempts on goal in the first half, one of those seeing Oblak, who also saved a penalty against Deportivo Alaves before the international break, denying Lucas Ocampos from the spot.

Yet Atleti's luck ran out with 20 minutes remaining, Jesus Navas crossing for fellow full-back Acuna to head home and deliver a blow to Atleti's hopes of glory.

Oblak's penalty save against Alaves came in the closing stages, but Atleti needed their goalkeeper much earlier this time around.

Ivan Rakitic drew a foul from Saul Niguez seven minutes in, yet Oblak stood firm to keep out Ocampos' effort, with Joan Jordan hitting the post a moment later.

9 - Only Diego Alves (10/20) has saved more penalties than Jan Oblak (9/29) since the start of 2014/15 in all competitions among all LaLiga goalkeepers (excluding shootouts). Rescuer. pic.twitter.com/CwEYdye7x6

Having faced more attempts on their goal during the first half than in any other game this season, Atleti almost made a fantastic start to the second period – Luis Suarez just failing to read Angel Correa's cross.

Rakitic sliced over from close range as Sevilla attempted to regain momentum, though Yassine Bounou had to be alert at the other end to keep Koke at bay.

However, Sevilla got the goal their display deserved in the 70th minute – Navas beating a poorly organised Atleti line to centre for Acuna, whose header found the right-hand corner.

Atleti wanted the goal disallowed for a handball earlier in the move, but the VAR saw no reason to rule it out.

Correa seemed destined to salvage a point in stoppage time, only for Bonou to pull off a brilliant stop and condemn Diego Simeone to just a fourth defeat against Sevilla in 23 meetings.

What does it mean? Has the title slipped from Atleti’s grasp?

Atleti looked set to runaway with LaLiga at one point earlier this season, but a run of just four wins from nine games – combined with the consistency of Madrid and Barca behind them – has seen their lead cut right down, and Ronald Koeman's side will be full of confidence as they prepare to welcome Valladolid to Camp Nou.

As for Sevilla, it is their first league victory over Atleti in nine attempts, and Julen Lopetegui's team are now 12 points clear of city rivals Real Betis in the Champions League hunt.

Oblak and Bonou both come up big

He may have been on the losing side, but Oblak was once more the standout performer for Atleti – he has now made nine penalty saves since the start of 2014-15, trailing only Diego Alves (10) among LaLiga goalkeepers in that regard.

However, it was his counterpart Bonou who ultimately proved a hero for Sevilla. He had four stops to make but his final one, from Correa's close-range toe poke, was of supreme quality and secured a deserved victory.

1 - @SevillaFC_ENG's Julen Lopetegui has registered his first managerial win against Diego Simeone in all competitions, with this his sixth game against him (W1 D4 L2). Hope. pic.twitter.com/dG4cxR1Lqa

Suarez had scored in three of his previous four games against Sevilla at the Ramon Sanchez-Pizjuan prior to Sunday’s game – all three of those goals coming as a Barcelona player between 2016 and 2019.

Atleti's leading scorer was off the pace, though, and failed to register a single attempt. He did create one chance, which was a superb, delicate lob to tee up Correa, but Bonou prevented Atleti from finding the equaliser they were looking for.

- Sevilla have ended to their worst run without winning against Real Madrid, Barcelona and Atletico Madrid combined (15 games, six draws, nine defeats) in LaLiga, a slump that began after the 3-0 win over Lopetegui’s Real Madrid in September 2018.
- Atletico have lost two out of their past seven games in LaLiga (W3 D2), as many as their previous 40 games in all competitions (W26 D12).
- Acuna scored his first goal for Sevilla after 22 league games with his first shot on target. It was the first headed goal by a Sevilla defender in open play since Federico Fazio in November 2012, during a 5-1 derby win over Betis.
- Sevilla have earned 58 points after 29 games in LaLiga this season. Only one team has failed to convert such a points total into a top-four finish – Unai Emery's Sevilla in 2014-15.

Atleti head back to Seville next Sunday to face Betis. Sevilla, meanwhile, travel to Celta Vigo a day later.