Ivan Rakitic and Jules Kounde got the goals as Sevilla put one foot in the Copa del Rey final thanks to a first-leg win over Barcelona. 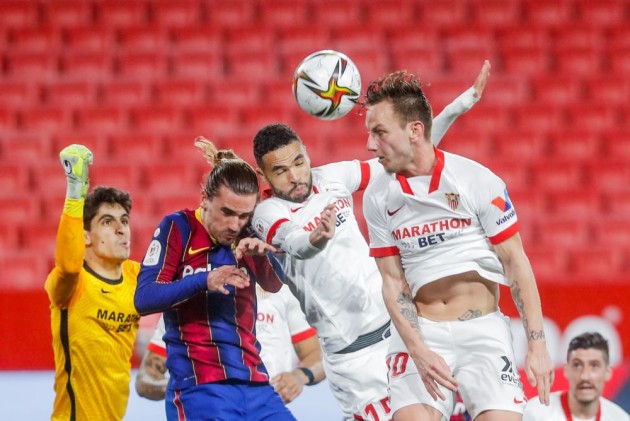 Barcelona have it all to do in their Copa del Rey semi-final after Jules Kounde and former Blaugrana midfielder Ivan Rakitic secured Sevilla a 2-0 win in Wednesday's first leg at the Ramon Sanchez Pizjuan. (More Football News)

The Copa remains Barca's most realistic chance of silverware this term, and Ronald Koeman's first trophy at the helm, but they will have to do it the hard way after slipping to their first defeat in 90 minutes since December 8, a run of 16 matches across all competitions.

Kounde got the first goal with 25 minutes played, the 22-year-old centre-back charging forward to great effect a few moments after going close from just outside the box.

Barca dominated most of the second half with Sevilla seemingly happy to play on the counter, but the visitors could not breach Yassine Bounou's goal and Rakitic finished them off on the break as Julen Lopetegui's side made it eight wins on the bounce.

1 - Jules Koundé  in the first half against Barcelona:

In an otherwise cagey opening, Barca should have taken an early lead in the 13th minute as Antoine Griezmann's disguised pass released Lionel Messi and his controlled effort was saved by Bounou's foot.

But the young Frenchman found the target five minutes later, the centre-back cheekily nutmegging Samuel Umtiti on the edge of the Barca box after a trademark buccaneering run before firing past Marc-Andre ter Stegen.

The German goalkeeper showed his class to keep the score 1-0 just before half-time, pushing Sergio Escudero's ferocious goal-bound effort over.

Umtiti made a vital intervention to deny Youssef En-Nesyri a one-on-one opportunity early in the second 45, and soon after Bounou once again thwarted Messi, turning his effort around the post.

That began a sustained period of pressure for Barca, yet Bounou in the Sevilla net remained largely untroubled behind his organised backline.

Barca's desperation to restore parity left them open to counter-attacks and Sevilla punished them, as Oliver Torres' pass over the defence released Rakitic and he emphatically blasted into the roof of the net.

Messi had one final opportunity to claim an away goal, but the excellent Bounou tipped his free-kick wide to clinch a deserved clean sheet.

What does it mean? – Chance of a trophyless 2020-21 increases for Barca

Well and truly out of LaLiga's title race, considered outsiders in the Champions League and now heading into the second leg of the Copa 2-0 down – it is not a great outlook for Barca's end-of-season trophy hopes.

Everyone knew it would be a difficult season for Barca, and this performance certainly showed they can still worry good teams, but Messi's chances aside, Koeman's men offered very little threat considering how much time they spent in Sevilla's half after the break.

Their unbeaten run comes to an end and Sevilla will head to Camp Nou next month knowing they can sit back and do damage on the break – if they get one away goal, there surely will not be a way back for Barca.

Jordan shows what Barca are lacking

While Bounou impressed in Sevilla's goal and their two goalscorers also did well, the best player on the pitch was Joan Jordan.

The midfielder was essential to Sevilla, both on and off the ball. He completed 94 per cent of his 67 passes and was involved in more duels (18) than any of his team-mates. His four interceptions was also a match-high, while only Alejandro Gomez matched his three tackles for Sevilla.

Although he played two key passes, including the clever ball for Messi's early chance, Griezmann was largely ineffective. He did not have any shots, meaning virtually all of the attacking burden was on Messi.

On this occasion it was Messi or bust, and their talisman could not provide the magic.

- Barcelona have only progressed in one of their five Copa knockout ties against Sevilla after losing the first game, although it was the last of them (in the 2018-19 quarter-finals they lost 2-0 away and won 6-1 at Camp Nou in the second leg).
- Sevilla have progressed in their last two Copa del Rey semi-finals (against Celta Vigo and Leganes) but have never progressed in three in a row.
- They have only beaten Barca in two of their last 18 matches in all competitions and those wins have both been 2-0 in the Copa.
- Sevilla have not conceded in their six Copa games this season - only once in history did they have a better start: seven clean sheets in a row in 2015-16, when they reached the final and Barcelona could only score in extra time.
- Bounou has not conceded a goal in his eight games for Sevilla in the Copa del Rey, saving all 18 shots on target he has faced (4/4 vs Barcelona).

These two do not renew hostilities for the second leg until March 3. Both have numerous key matches before then, including a LaLiga meeting between each other in Seville on February 27, but up next at the weekend is a home game against Deportivo Alaves for Barca as Sevilla host rock-bottom Huesca.