Needing 16 runs off the last over bowled by Prateek Jain, Shahrukh Khan hit the final delivery for a six to take help Tamil Nadu seal a famous win. 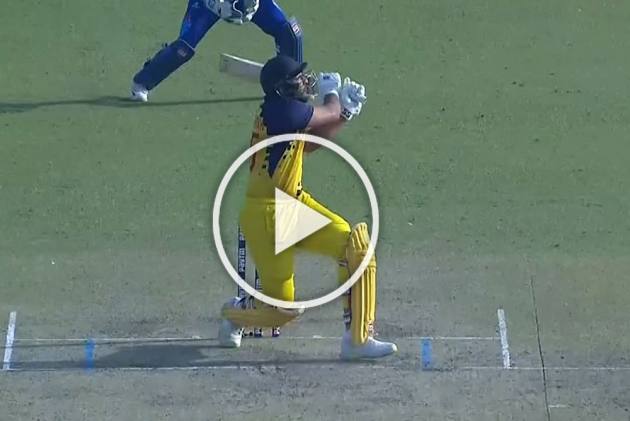 Needing 16 runs off the last over bowled by Prateek Jain, power-hitter Khan kept his cool under pressure to clobber the final delivery over deep-square leg to take Tamil Nadu to 153 for 6 and seal a famous win.

Tamil Nadu defended their #SyedMushtaqAliT20 title as a sensational last-ball six from Shahrukh Khan helped them defeat Karnataka by four wickets in the final. Khan, just as he did in the previous season, hit the winning runs. Video Courtesy: BCCI pic.twitter.com/3bkMRFjhxG

Five to win from the final ball in the Syed Mushtaq Ali Trophy final, and he smashes it for SIX helps Tamilnadu sink Karnataka in finalsðÂÂÂÂÂÂÂÂ¥

WATCH: Last Over Drama, Feat. A Controversial Pull Out

Thanks to their aggressive batting, Karnataka recovered on time after their batters were stifled by some good work by left-arm spinner Sai Kishore (3/12) and other Tamil Nadu bowlers.

Karnataka slipped to 32 for 3 in the sixth over with Sai Kishore getting the big wickets of the consistent Rohan Kadam (0) and captain Manish Pandey (13, 15 balls, 2X4) while Sanjay Yadav nailed Karun Nair (18).

Tamil Nadu looked in control of proceedings and kept the opposition batters under check before some poor bowling by T Natarajan (1/44 from 4 overs), brought into the XI in place of P Saravana Kumar who took a fifer in the semi-finals, and Sandeep Warrier (1/34 in 4) gave away runs towards the end.

In their run chase, Tamil Nadu appeared to stutter after a bright start by opener C Hari Nishaanth (23, 12 balls, 1X4, 2X6) before he was run out. N Jagadeesan, the other opener, struggled to force the pace, making 41 from 46 balls as did skipper Vijay Shankar (18, 22 balls).

The two were dismissed by spinner K C Cariappa (2/23) to put TN in a spot of bother.

Tamil Nadu slipped to 95 for 4 when Khan walked in. He revived the chase with a quick 21-run fifth wicket stand with R Sanjay Yadav (5). Yadav too fell while going for a big shot.

Tamil Nadu needed 30 runs from the last two overs and Khan kept their hopes alive with a massive six off Vidyadhar Patil's final delivery of the 19th over.

In the final over, Sai Kishore hit a boundary off the first ball to ease the nerves. But the next four deliveries yielded seven runs, including two wides.

Jain, who was given the huge responsibility of bowling the last over of the final, could not prevent Khan from smashing a six from the last ball to take TN over the line.

"Overall, we played amazing cricket. Everyone fought really hard. This innings was due from Shahrukh. He stepped up and did very well," he said.

"Karnataka bowled really well in the middle overs. Really happy to be on the winning side. It was a fantastic effort from all the bowlers (throughout)," he added.

On his part, Khan said, "There were a lot of things running in my mind. The ball was soft and the wicket was rough. I got the room and cleared my leg. We believe in each other. Special thanks to M Mohammed, who has been an unsung hero for Tamil Nadu for the last three years.

"This is the first six I have hit off the last ball."

Karnataka skipper Manish Pandey said it was a bittersweet feeling to lose in the final.

"The boys did really well for us throughout the tournament. Tamil Nadu played really well. The top-order could have got a few more runs," he said.