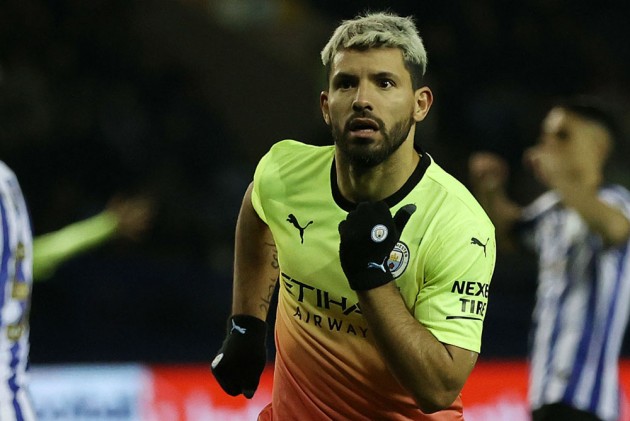 The Argentinian's 53rd-minute strike proved the difference as Pep Guardiola's side made it five successive wins in all competitions, matching their best run of victories in 2019-20.

Defenders Nicolas Otamendi and Benjamin Mendy struck the woodwork either side of half-time before Championship side Wednesday's resistance was eventually broken.

Goalkeeper Joe Wildsmith got a hand to Aguero's strike but could not prevent the ball going over the line as City's all-time leading scorer registered his 254th goal for the club.

20 - Since he joined Manchester City in 2011, Sergio Agüero has netted 20 FA Cup goals in just 22 games in the competition; the most of any player in this period. Guarantee. pic.twitter.com/Q03FS7BvIF

Gabriel Jesus and Aguero were both in the City starting line-up and the former headed a 20th-minute chance wide from a John Stones cross.

Aguero spotted his fellow forward's run seven minutes later but the Brazilian failed to get a good connection on a stretching volley when free six yards out.

Otamendi nodded against the crossbar from a free-kick delivered by Riyad Mahrez, who also picked out Stones from a set-piece only for the defender to miss the target when his downward header hit the ground and bounced over the top.

There was a greater impetus from City after the break, though, as Mendy's first-time effort cannoned off the frame of the goal in a sign Guardiola's half-time words had worked.

Wednesday did not heed the warning, with Aguero left in enough space in the box to collect Mendy's pass, turn and fire a shot which looped off Wildsmith's left arm and went in.

Replays showed it was a close call over whether Aguero was onside or had strayed beyond last man Dominic Iorfa, though the absence of VAR at Wednesday's ground meant there was no closer inspection.

Wildsmith did redeem himself somewhat by thwarting Stones, Rodri and substitute Raheem Sterling with his legs, while another more conventional save with his hands denied Mahrez.

However, Wednesday failed to register a shot on target across the piece and mustered their only effort overall in the sixth minute as Aguero's strike proved enough to send City into the last eight.

What does it mean? Treble (of sorts) still on for City

Guardiola's men won the EFL Cup for a third successive season on Sunday, though a repeat of last term's domestic treble appears highly unlikely given Liverpool's 22-point lead in the Premier League.

Yet City could still end the campaign with three trophies having beaten Real Madrid in the first leg of their Champions League last-16 tie last week. With a fifth straight win, they are hitting form at the right time.

A second-half winner at Hillsborough took Aguero's tally for the season to 23 in all competitions, more than any other player in the Premier League.

In reaching 254 goals for City, he also moved beyond Wayne Rooney's record haul of 253 with Manchester United, a statistic that those of a blue persuasion will particularly enjoy…

A second half resurgence

Another quiet night for Bernardo Silva

Bernardo Silva was one of City's best players last season but has been a shadow of himself in 2019-20.

Here he made just one key pass – compared to five for Jesus and four for David Silva – and had just one shot compared to Mahrez's six. This was Bernardo Silva's chance to further his case for inclusion in crucial Champions League games and it was hardly persuasive.

- Since Guardiola joined City in August 2016, the Spaniard has overseen 15 victories in FA Cup matches (D1 L2), at least five more wins in the competition than any other manager over this period.
- City have kept 11 clean sheets in their 18 FA Cup matches under Guardiola, conceding just nine times; only Chelsea (12) have managed more in the same timeframe.
- In all competitions, Wednesday have lost six of their past eight games at home (W1 D1), as many defeats as they suffered across the previous 29 at Hillsborough.

It is the small matter of the Manchester derby at Old Trafford on Sunday next for City. Wednesday, currently residing in the middle of the Championship table, travel to Brentford the previous day.