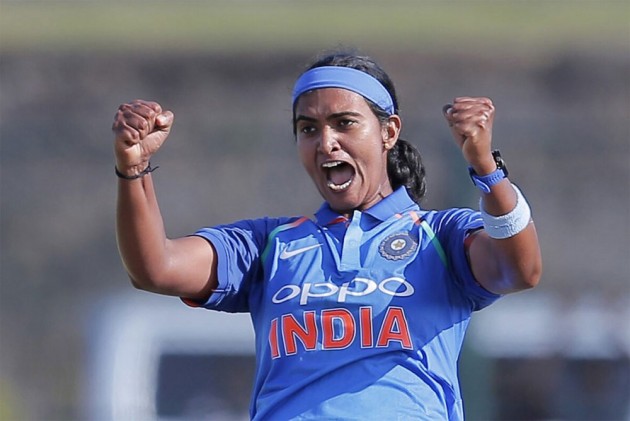 Senior India pacer Shikha Pandey finds suggestions such as use of smaller balls and shorter pitches to make women's game appealing to be "superfluous" and urged the ICC "not to tinker" with rules to attract more audience. (More Cricket News)

Pandey, one of India's finest new ball bowlers after Jhulan Goswami, shared a series of tweets in the wake of a recent ICC webinar featuring New Zealand captain Sophie Devine and India's rising star Jemimah Rodrigues where some of the suggestions were floated.

"I have been reading/ hearing a lot about the changes being suggested to help grow women's cricket/ make it a more attractive product. I personally feel most of the suggestions to be superfluous," 31-year-old Pandey, a serving officer of the Indian Air Force, wrote.

I have been reading/ hearing a lot about the changes being suggested to help grow women's cricket/ make it a more attractive product. I personally feel most of the suggestions to be superfluous.

Pandey, who has 113 wickets from 104 international appearances, drew the analogy of 100m sprints while describing what a light weight ball and 20-yard pitch would mean for women's cricket.

"So the whole 'decreasing the length of the pitch' for whatever reasons seems dubious. Also, it almost definitely takes the double headers out of question," she wrote.

While she is game for reduction of size of the cricket ball in women's game but she is completely against reducing the weight simply because of the perception that they can't hit the ball long.

"Please don't bring the boundaries in! We have surprised you with our power-hitting in recent times, so remember, this is only the beginning; we will get better. Please have patience. We are skilled players, who are evolving," wrote Shikha.

What she finds objectionable is trying to achieve growth through tinkering of rules rather than robust marketing.

"Growth can also be achieved by marketing the sport well. We don't have to tinker with rules or the very fabric of the game to attract an audience.

"Why not have DRS, Snicko, Hotspot, all of the technical acumen and live broadcast for every game that we play anywhere in the world," she questioned, asking for more investment at the grassroots.

Last but not the least, she made a defining point stating that women's cricket shouldn't be compared to the men's game as both are completely different in its essence.

"We need to see it as a different sport altogether ... A sport that 86,174 spectators turned up to watch on March 8, 2020 and several million watched live on their television sets," Pandey said, referring to their T20 World Cup final against Australia at the MCG.

"They saw something special in us, and here's hoping you do too," she concluded with a hastag "champions in our own rights".