Shikha Pandey's Omission A Tough Call, She Is Not Dropped: Harmanpreet Kaur

Pandey Pandey's omission from the ODI and T20 teams for the South Africa series created quite a flutter. She was India's second-highest wicket-taker in the T20 World Cup 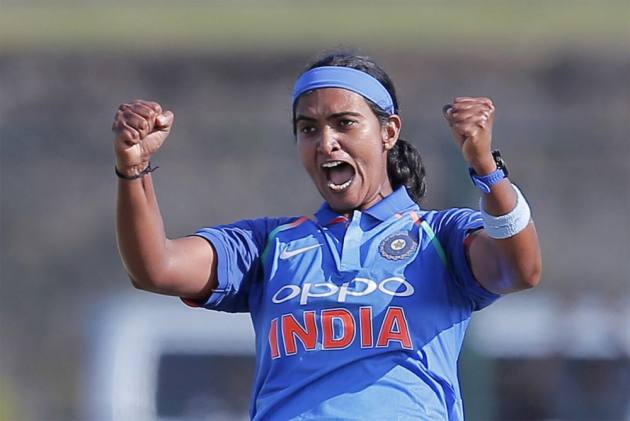 Indian women's ODI team vice-captain Harmanpreet Kaur on Friday said it was a "tough call" to leave veteran pacer, Shikha Pandey, out of the upcoming limited-overs series against South Africa and insisted that she has not been dropped for good. (More Cricket News)

The Indian women's team will play five ODIs and three T20Is against South Africa, starting here on Sunday, which will mark the team's return to competitive cricket after almost 12 months.

Pandey's omission from the ODI and T20 teams for the South Africa series created quite a flutter. She was India's second-highest wicket-taker in their previous assignment -- the T20 World Cup.

"I know it was a tough call, sometimes, you need to give chance to other players," said Harmanpreet, who is the captain of India's T20 team, during a virtual press conference ahead of the first ODI on Sunday.

"She is not dropped...sometimes you need to take chances, after this tournament we will be able to settle our combination as we have a lot of cricket coming up in next 2-3 years."

The 31-year-old Pandey has played 52 ODIs and 50 T20 Internationals for India, taking 73 and 36 wickets respectively.

Talking about the upcoming series, Harmanpreet said there is no rustiness in the side despite the prolonged time away from the game and they will look to regain their confidence with a good performance against South Africa.

"I don't think we are feeling any rustiness, we are very exited, I know it is a long break, sometimes things are not in your control. I hope we will have a great tournament," she said.

"Every tournament is important, and definitely South Africa is one team which has done very well in last couple of years and for upcoming tournaments, it is an advantage for us to play well against them and regain our confidence since we are playing after a long time."

Asked if the team is going into the series with an unsettled squad, Harmanpreet said: "Before this series, we got 4-5 days to set our combinations. We had open nets, we tried some combinations. Before the first game, we will fix what needs to be fixed.

"We will see how we will go about things, what to do with our batting and bowling line up, how to set our playing XI."

Harmanpreet will complete a century of ODIs on Sunday and she said it will only motivate her to do better.

"I didn't know that (100th ODI). I will be very excited because first of all we are playing after a long time and then it is my 100th ODI so, both the things will give me a lot of energy to play and I hope to do well," she said.

"If I talk as a person, I have learnt a lot (in the last decade). I have seen lots of ups and downs, when I was in good frame of mind, I was playing good cricket, sometimes form was here and there. Whatever experience I have, I want to share with my team and hope it helps my team to treat downfall."

Harmanpreet hasn't been able to score a fifty in any format in the last 10 matches since February last year.

"As a player, it doesn't matter if you haven't played cricket for long but you want to perform for the team whenever you get an opportunity," she said.

Asked if this break will be a loss for Indian women's cricket compared to Australia and England, who have been playing regularly, Harmanpreet said: "It was a long break but sometimes things are not under your control, now we are getting to play cricket and we have to ensure we use this time and make our best combination and prepare for the upcoming tournaments."