Singhraj's monumental effort paid off as the 39-year-old, only four years after taking to the sport, won the Paralympics bronze medal in the men's 10m air pistol event 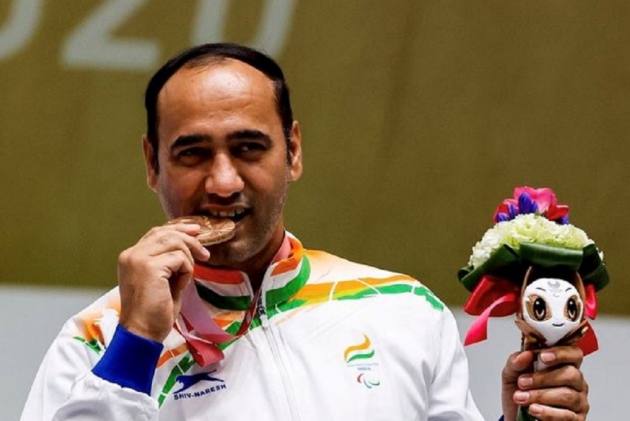 COVID-19 came in the way of him going to the range before the Tokyo Paralympics. So, Indian shooter Singhraj Adhana simply built the range at home after drawing its layout in just one night. Day 7 Blog | News

At the Asaka Shooting Range here on Tuesday, the monumental effort paid off as the 39-year-old, only four years after taking to the sport, won the Paralympics bronze medal in the P1 men's 10m air pistol SH1 event.

However, for someone who could only watch helplessly as his wife once sold her jewelery to support his shooting dream, he knew the move was a huge gamble and so did his mother.

But during the lockdown, the polio-afflicted shooter's desperation to resume training had reached a point where he was not able to even get a good night's sleep.

"As I was not able to train, I started thinking that my dream of winning a medal is over. That's when my coaches suggested why not try building a range at home," Adhana said in a media interaction organised by broadcaster Eurosport and the Paralympic Committee of India.

"I was getting desperate and was not able to sleep at all because of the absence of training. So I approached my family with the idea and they were taken aback at first as it involved lakhs of rupees.

"My mother only asked me to ensure that we are able to feed ourselves later on if something went wrong. But thanks to my family and coaches' support, the green signal and help from the Paralympic Committee of India and NRAI, we succeeded in my mission and the range was soon up and running," he added.

He designed it himself.

"I drew the layout overnight and my coaches told me that if at all we are building a range then it has to be of international level as it would then help me for not just Tokyo but also Paris Games."

Adhana, who has served as the chairman of the Sainik Public School in Faridabad, shot a total of 216.8 to finish the event in the third place after qualifying for the eight-man final as the sixth best shooter.

Hovering around the top three, Adhana dropped out of contention with his poor 19th shot but managed to get back in the reckoning with his 20th attempt as China's Xiaolong Lou got 8.6.

Adhana's first brush with the sport happened when he accompanied his nephew to a shooting range.

"My nephew Gaurav Adana is a shooter. I was smiling as they trained and the coach asked me about the reason. That day I tried my hand at shooting and was on target four out of five times including hitting the inner 10," he recalled proudly.

Adhana was coming into the Games after winning a gold at the 2021 Para Sport World Cup held in Al Ain, UAE, where he upstaged 2016 Rio Paralympics bronze-medallist Server Ibragimov by 2.8 points to claim the top spot.

"The coach was taken aback and asked me to start focussing on the sport, saying that I can bring laurels for my country, something I have always wanted to do.

"I have also done social work before getting into shooting when I realised that I can indeed do something worthwhile for my country," said the athlete whose grandfather was part of the freedom movement and fought in the second world war.

As the pistol is held with one hand only, athletes in SH1 category have an impairment affecting one arm and/or the legs, for example resulting from amputations or spinal cord injuries. P1 is a classification for the men's 10 air pistol competition.

But these limitations could never deter Adhana as he had trained his eyes on achieving success in sports.

When asked about the struggles in his journey to the top, he got emotional and could not express much during the virtual interaction with a handful of journalists.

"I will do it later. Life is tough for any para athlete. I had polio on both my legs and needed crutches to walk. But my mother, who has always supported me along with others in the family, would tell me, motivate me to stand on my own legs," he said.

Manish Narwal, who topped the qualifications with 575, was eliminated in the seventh place when it mattered the most, and Adana was disappointed that this compatriot could not finish on the podium.

"When Manish Narwal was eliminated I was sad but soon realised that I need to continue my fight," said Adhana, who did meditation in the time between the qualification and the final.