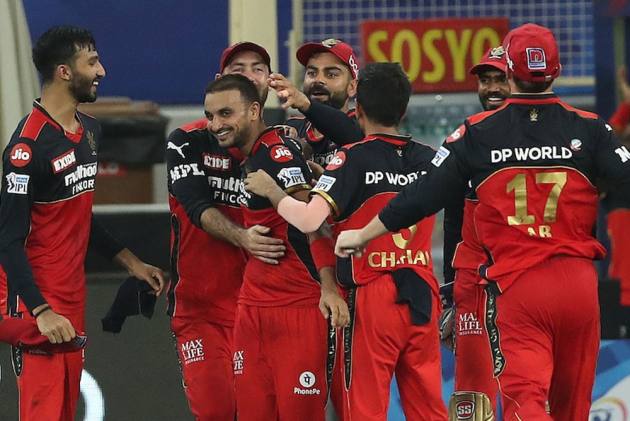 Harshal Patel has done it again. The uncapped Royal Challengers Bangalore (RCB) pacer is proving to be the nemesis for the most successful Indian Premier League (IPL) side, Mumbai Indians.

Months after claiming a five-wicket haul in the IPL 2021 season opener in Chennai, Patel turned up in Dubai on Sunday to set up RCB to yet another big win against the holders. His four-wicket haul was not enough to earn the man of the match, but the 30-year-old from Haryana achieved what he's been looking for some time -- a hat-trick.

After their dominating 54-run win against Rohit Sharma's five-time champions at Dubai International Cricket Stadium, the right-arm pacer shared a bit of personal stats. "This is my sixth time being on a hat-trick and finally got one, so pretty happy," he said.

In one inspired spell, Patel first removed Hardik Pandya with the first ball of 17th over, caught by Virat Kohli, then followed it up with a perfectly executed yorker to bamboozle dangerous Kieron Pollard. To complete the hat-trick, Patel produced a deceptively dipping delivery to trap Rahul Chahar in front.

"He [Kieron Pollard] is somebody who can do damage if you bowl in his areas, we wanted to take him wide and then once you drag him wide you have the option to bluff him, that came off really well," Patel talked about his prized wicket.

In April, before the coronavirus pandemic forced the lucrative T20 league to hit the pause button, Patel produced probably his best bowling performance to help RCB start their IPL 2021 campaign with a thrilling two-wicket win. In that match, he took a fifer but missed out on the hat-trick after removing Krunal Pandya and Pollard off successive deliveries. He did manage to pick the man of the match award though.

Patel is now the joint-most successful uncapped bowler in an IPL season, with RCB team-mate Yuzvendra Chahal (2015) on 23 scalps each. Chahal, who failed to make the India squad for the upcoming ICC T20 World Cup, showed his worth by claiming three wickets. The win helped RCB complete a league double over MI, their first-ever.