Bangladesh continued to dominate hosts Sri Lanka in the first Test. When bad light forced early stumps on Day 2, the visitors were 474/4 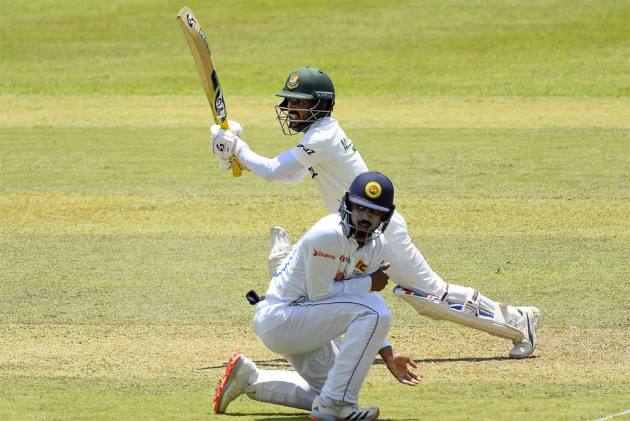 Captain Mominul Haque completed a century beside newcomer Najmul Shanto as their 242-run partnership lifted Bangladesh to a commanding 474/4 against Sri Lanka after two days of the first Test on Thursday.

Shanto, who started the day on his maiden test century at 126, was out for 163 soon after lunch to end their third-wicket stand. Mominul reached his 11th Test century in the morning session and was out, too, before tea in the only other wicket to fall all day.

Mushfiqur Rahim was on 43 and Liton Das on 25 when play was ended 96 minutes early due to bad light. Play will resume 15 minutes early on day three after 25 overs were lost on day two.

The batsmen have done remarkably well considering they came into the Test amid intense criticism after losing a home series to West Indies and losing six white ball games in New Zealand.

They are without their best player — allrounder Shakib Al Hasan — and best fast bowler – Mustafizur Rahman — both of whom are playing in the Indian Premier League.

“I am really happy for the boys," Bangladesh coach Russell Domingo said.

“They have taken a lot of criticism over the last couple of weeks. They have come back and put in a big performance in foreign conditions. They were positive and hungry, and worked really hard. Some of them got good rewards.”

Shanto showed why he was rated so highly in Bangladesh with 163 in his seventh Test. Batting for more than eight hours, Shanto faced 378 deliveries. He hit 17 boundaries and a six. Dropped on 28 by Niroshan Dickwella, Shanto showcased his test match temperament by not taking any undue risks.

Mominul was more free-flowing with some elegant strokes, including 11 boundaries. His 127 was his 11th Test hundred, the most by a Bangladeshi batsman.

“We didn’t get as much support from the wicket as we thought,” Sri Lanka seamer Vishwa Fernando said.

“We felt it was dry underneath and it’s now a batting wicket. Today, the plan was to cut down the runs and fence them in.”

Despite a nice grass cover, the Pallekele pitch was slow and the fast bowlers had their work cut out. Much was expected of Lahiru Kumara, who has the ability to clock 150 kph, but he got little help from the track with even his bouncers rarely rising above waist level.

The batsmen were quick to go on the back foot and pull him to midwicket but Kumara was also guilty of not bowling to a probing line and creating pressure.

Kumara did dismiss Shanto when he took a return catch but much more was expected of him when he was picked ahead of Asitha Fernando.

Allrounder Dhananjaya de Silva picked up the other wicket of Mominul, who edged to Lahiru Thirimanne in the slips.

Sri Lanka has the third new ball available in five overs, but dry areas are appearing on the pitch which should also help Bangladeshi's spinners. They have a first Test win overseas in four years in sight.

“There’s a lot of hard work ahead of us to even consider thinking of winning this test,” Domingo said.

“We know it looks like a good wicket but the amount of heat that’s been on it ... . There’s a bit of a rough developing outside the right-hander’s off-stump, hopefully our spinners can come into it.

"Batting second after a big score, there’s always a little bit of tiredness. There’s scoreboard pressure. It takes one or two mistakes, a couple of good spells from one or two bowlers, and you have got a real chance of taking 20 (Sri Lanka) wickets."