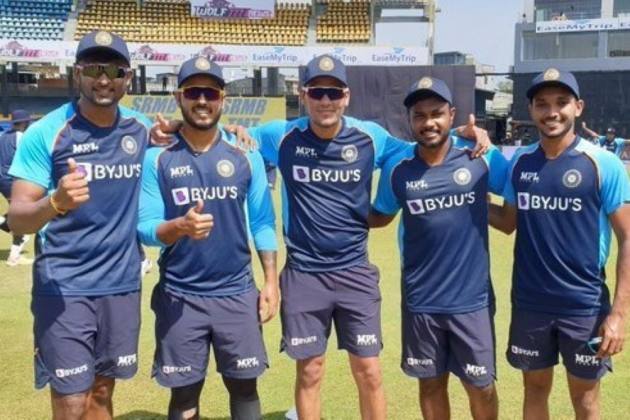 India fielded a new-look team with as many as five rookies making their ODI debuts in the third and final ODI against hosts Sri Lanka in Clombo. SL-IND Live Blog | News

India opted to bat first in the final 50-over game of the series in Colombo on Friday.

As expected, head coach Rahul Dravid ensured game time for almost everyone in the squad as Nitish Rana, Rahul Chahar, Chetan Sakariya, Kishnappa Gowtham and Sanju Samson made their debuts.

Chahar and Samson have already played T20 Internationals for India. The sixth change in the side is pacer Navdeep Saini.

This is the  second instance in history that India has handed debuts to five players in a 50-over match.

India had five debutants in an ODI match against Australia way back in December 1980. Spinner Dilip Doshi, Kirti Azad, Roger Binny, Sandeep Patil and Tirumalai Srinivasan made their debuts at the Melbourne Cricket Ground.

Praveen Jayawickrama, Akila Dananjaya and Ramesh Mendis are three changes in the Lankan side.

India have already sealed the three-game series 2-0. Ishan Kishan and Suryakumar Yadav made their debuts in the first ODI of this series. (with inputs from Agencies)