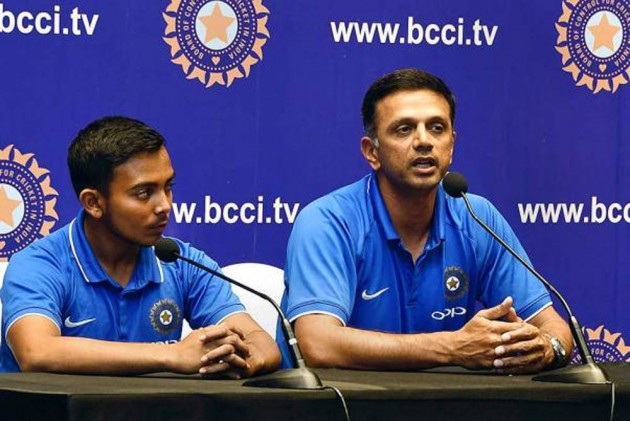 Talking about the prospects of working with his previous mentor once again, Shaw said that it will be a "different kind of mazaa (enjoyment)."

Dravid helped groom Shaw as U-19 coach, and now the former India captain Dravid will oversee India's campaign in Sri Lanka after being named as the head coach.

"The way he speaks, the way he shares his coaching experience, is just amazing... He knows everything about cricket. The way he speaks on conditions and how to use them, is just out of this world," Shaw told Indian Express.

Dravid, 48, is regarded as one of the best in the business with strong leadership skills and a no-nonsense approach. And Shaw already expected "discipline in the dressing room".

"As Rahul sir is there, one will expect discipline in the dressing room. I’m looking ahead to the practice sessions with Rahul sir because I love to speak to him for hours. This tour, I just have to grab the opportunity," the 21-year-old added.

The tour starts with the first ODI n July 13. All six matches will be played at R.Premadasa Stadium in Colombo.

The Indian cricket board (BCCI) had decided to name two different national teams to play in different formats at the same time in Sri Lanka and England. Ravi Shastri, the regular head coach, is currently in England with the Test side.

India lost the ICC World Test Championship final to New Zealand, and are gearing up for the five-match Test series against England, starting August 4.