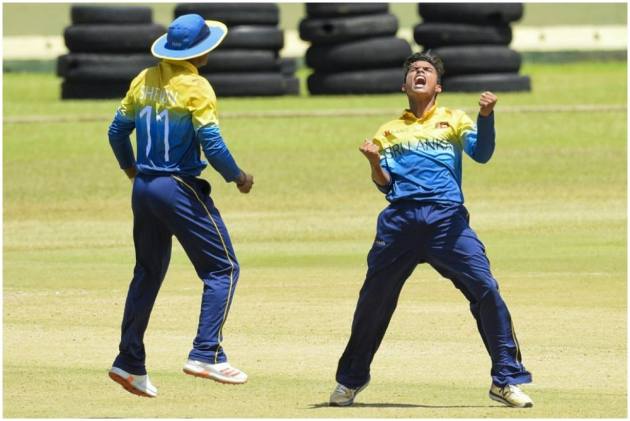 Sri Lanka executed a skillful defence of their total as captain fantastic Dunith Wellalage and his bowlers fired them to victory in Georgetown against Scotland. After Sakuna Liyanage’s 85 powered the Lankans to 218, Wellalage’s canny left-arm spin saw him rack up 5 for 27 to bowl out Scotland for 178 in 48.4 overs. (More Cricket News)

Batting first, Sri Lanka lost Shevon Daniel in the second over before a 52-run stand between Chamindu Wickramasinghe and Sadisha Rajapaksa lifted their spirits. However, a double blow by Jack Jarvis in the 10th over and another from Oliver Davidson saw Sri Lanka down to 63/4 in no time.

With Liyanage’s run-a-ball 85 and Raveen de Silva (30) delivering some important runs down the order, Sri Lanka were able to cross the 200-run to give the bowlers something to defend. Sean Fischer-Keogh (3/56), Jack Jarvis and Oliver Davidson – two wickets apiece – starred with the ball for Scots.

But underdogs Scotland were unable to mount a viable attempt with the bat as Sri Lanka’s spinners turned the screw. Spearheaded by Wellalage’s brilliance, the 2000 runners-up suffocated the Scots as Daniel (2/16), Matheesha Pathirana and Wanuja Sahan also took important wickets.

Only middle-order batter Jarvis, who notched 55 off 61 balls after arriving at the crease with scoreboard pressure intensifying, scored over 20 for Scotland after the top four failed to fire in the face of some accurate Sri Lankan bowling.

A flurry of late wickets saw Scotland eventually dismissed with eight balls of the innings remaining, 40 runs short of Sri Lanka who will look to build valuable momentum ahead of their mouth-watering Monday meeting with fellow Friday winners Australia.