Sri Lanka scored 267/3 in 88 overs on Day 1 of the first Test against Sri Lanka in Galle. Catch highlights and cricket scores of SL vs WI match here: 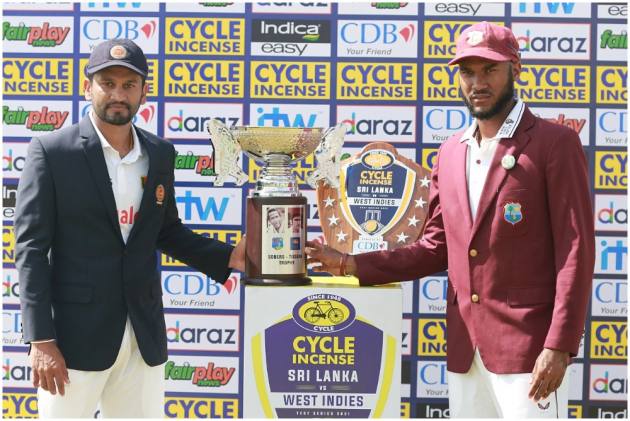 Sri Lanka captain Dimuth Karunaratne hit an unbeaten 132 off 265 balls, laced with 13 balls, as the hosts enjoyed a dominant Day 1 of the first Test against West Indies at  Galle International Stadium, Galle Sunday. At the close of play, Sri Lanka were 267/3 in 88 overs with Dhananjaya de Silva, also unbeaten on 56 off 77. Karunaratne and De Silva have already added 97 runs in 138 balls for the fourth wicket.

Windies started the post-Tea session on a promising note, with Roston Chase getting two quick wickets -- those of Oshada Fernando and Angelo Mathews for three each --  but struggled to keep the pressure on the Lankan batters.

Earlier in the day, Sri Lanka elected to bat first after winning the toss and the openers did well to counter the West Indies attack without loss in the opening session although Karunaratne was lucky to survive when he was on 14. He added 61 runs with Pathum Nissanka (56 off 140).

Karunaratne edged one off the bowling of Rahkeem Cornwall but vice-captain Jermaine Blackwood at slip failed to hold onto the chance. Shannon Gabriel got the breakthrough in the 50th over with the wicket of Nissaka, caught by Rahkeem Cornwall.

The first day's play also witnessed West Indies debutant Jeremy Solozano being stretched off the field after coping one on his helmet while fielding at short leg. The West Indies team management posted on social media a short time after that the player was not feeling well and had to be transferred to a hospital in Colombo for scans and further treatment.  Catch Day 1 highlights and scores of SL vs WI, first Test here.

Well set Pathum Nissanka (56) has been dismissed. Shannon Gabriel is the man with the honours. Nissanka has been taken by Rahkeem Cornwall at first slip. Big moment in the match! Sri Lanka 139/1 (49.1)

West Indies have tried both pace and spin but they are unable to break the 100-plus opening stand between Dimuth Karunaratne and Pathum Nissanka. Nissanka joins his captain and brings up his fifty too. Sri Lanka are well controlling the proceedings. Sri Lanka 139/0 (49)

Welcome back after the lunch. Pathum Nissanka and Dimuth Karunaratne settled well in the first session and now they have started to play aggressive. Karunaratne is on the brink of his fifty, while Nissanka is doing well as a second fiddle. Meanwhile, Shai Hope is the substitute fielder in place of injured debutant Jeremy Solozano, who has been taken to hospital for scans after being hit in the helmet, at this time. Sri Lanka 88/0 (34)

West Indies debutant Jeremy Solozano is being taken to a hospital for scans after suffering a blow to his helmet when Dimuth Karunaratne attempted a pull shot at short leg  in 24th over.  Solozano was stretchered off the field after being hit.

The first hour of play saw some appeals, a couple of no balls and a few boundaries. Although Pathum Nissanka looks uncomfortable, Dimuth Karunaratne is keeping the scoreboard healthy. Meanwhile, Ranjan Madugalle completes 200 Tests as referee. Sri Lanka 48/0 (20)

West Indies introduce some spin, bringing in Rahkeem Cornwall. Shannon Gabriel overstepped but no serious damage done by Sri Lankans. Cornwall appeals for a lbw but replay shows ball went down leg side. Dimuth Karunaratne and Pathum Nissanka have given a steady start to the hosts. Sri Lanka 32/0 (12)

Shannon Gabriel and Jason Holder are keeping things tight for Sri Lankan batters. Dimuth Karunaratne and Pathum Nissanka are waiting for the bowlers to make a mistake it seems. Sri Lanka 17/0 (5)

The news from the middle is Sri Lanka have won the toss and elected to bat first. Also, West Indies captain Kraigg Brathwaite reveals that Jeremy Solozano will make his debut today.

Hello and welcome to Sri Lanka vs West Indies 1st Test match, perhaps World Test Championship live from Galle. There is moisture in the pitch which means the batters will dominate the proceedings for the first two days. Subsequently, spin is likely to play a major role later on.

Sri Lanka have recalled former captain Angelo Mathews to bolster their batting. Dinesh Chandimal will also add muscle to the middle order. The hosts will bank on their spinners to do damage against the West Indians who have never won a Test match in Sri Lanka. Interestingly, Brian Lara and Chris Gayle have scored triple hundreds in Sri Lanka but this is an entirely different Caribbean side. This is head coach Micky Arthur's final series with Sri Lanka. This is West Indies' second World Test Championship series in the new cycle. They had won one Test and lost one against Pakistan in August, giving them 12 points. For Sri Lanka, this is their first series in the new cycle.