At the end of the day's play, Sri Lanka were 46/2 in the second innings having conceded a 49-run lead to visitors West Indies in the second Test in Galle on Wednesday. 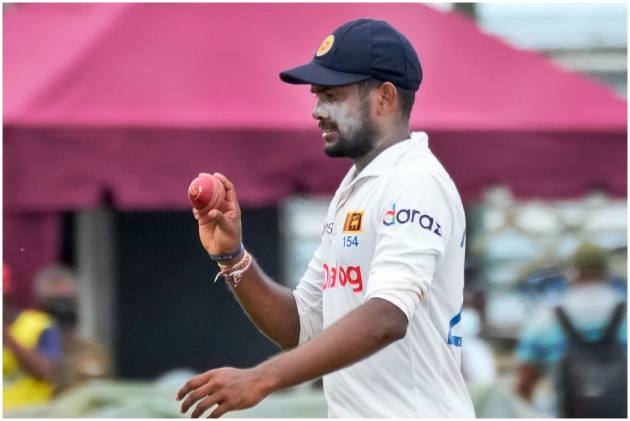 Off-spinner Ramesh Mendis fueled a Sri Lankan fightback with a maiden five-wicket haul but the West Indies still led by three runs in the second innings at stumps on the third day of the second test on Wednesday in Galle. (More Cricket News)

Sri Lanka were 46/2 in their second innings at close having conceded a 49-run first-innings lead to the visitors, who were bowled out for 253. Sri Lanka scored 204 in its first innings. Captain Dimuth Karunaratne (6) was run out to a brilliant direct hit from Kyle Mayers and Oshada Fernando (14) was also run out.

Pathum Nissanka was batting on 21 with Charith Asalanka on 4. Mendis had bowling figures 6/70 while left-arm spinners Praveen Jayawickrama and Lasith Embuldeniya took two wickets each. Sri Lanka went to lunch strongly placed on 145/2 but lost the remaining wickets for the addition of another 59 runs.

Resuming Wednesday on 69/1, the West Indies had batted remarkably well to add 76 runs in the first session, losing only one wicket. But the slide started post-lunch when West Indies captain Kraigg Brathwaite, who was batting with confidence, was bowled by Embuldeniya for 72.

The bowler ran over the wicket and pitched a flighted ball outside the right-handed Brathwaite’s leg stump and the ball turned sharply and hit the top of his off stump. Mendis had Roston Chase (10) caught at leg slip by Asalanka and trapped Shai Hope (22) LBW.

Jason Holder (4) unsuccessfully reviewed an LBW decision against him because a ball delivered by Mendis appeared to bounce over the stumps. In the next ball, Joshua da Silva played through the wrong line expecting a ball from Mendis to turn more than it did and was bowled. His fall left West Indies at 197/7.

Mayers (36 not out) with Kemar Roach (8) ensured that the West Indies took a lead in the first innings and extended it in a 38-run partnership for the ninth wicket with Veerasammy Permaul (8). Sri Lanka won the first test by 187 runs at the same venue, meaning the West Indies must win here to draw the series.