The PSG and Marseille rivalry got a new nasty chapter after 17 cards, including five reds, were shown in a crazy Ligue 1 match in Paris 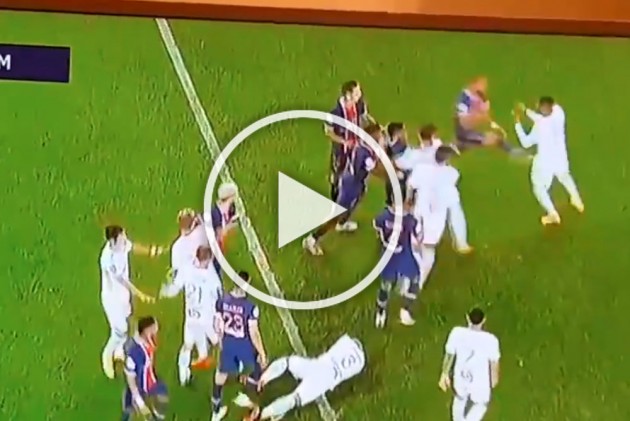 In one crazy night in the French capital Paris, football players from the country's two top teams - Paris Saint-Germain and Marseille - fought each other, forcing the referee to dish out as many as 17 cards including five reds. (More Football News)

Brazil superstar Neymar, who accused rival player Alvaro of racism and also shared messages of him being subjected to homophobic bullying, got a straight red. His PSG team-mates, substitutes Leandro Paredes and Layvin Kurzawa, and Marseille duo Jordan Amavi and Dario Benedetto joined the former Barcelona player in the march.

The match, dubbed Le Classique, an equivalent to Barcelona vs Real Madrid Clasico in Spain, was a fractious one from the beginning. Florian Thauvin's 31st-minute strike proved enough to consign the UEFA Champions League finalists to their second Ligue 1 defeat in two.

But the two teams were fighting, literally, for more than three points.

All hell broke loose in the injury-time when Marseille's Benedetto pushed Paredes, with the PSG midfielder then punching him to the ground before appearing to headbutt Alvaro. It was followed by more kicking and punching, with Kurzawa and Amavi getting involved in the fight.

The referee also checked the VAR for an apparent punch from Neymar.

It was complete mayhem at Parc des Princes.

And fans have a field day sharing their opinions on every aspect of the clash. Here are some:

Going off in the #PSG #Lyon game pic.twitter.com/5Bx3f21hTf

FIVE red cards in the 97th minute in #PSGOM!

Is this Football or Rugby?

How did he not get red card ? French referees are racist so don't worry lool keep it moving

Football doesn’t get any more worse than this... two straight losses for PSG #PSGOM pic.twitter.com/JcoDv7ytRl

If Alvaro is a racist, he has to leave our club instantly, and if you know the history of OM, every supporter thinks the same thing. No racism in my club. I hope there will be an investigation. #PSGOM

The reverse fixture is scheduled for February 2, next year.