Max Verstappen looked destined to extend his lead over Lewis Hamilton in Baku, but the title rivals both failed to register a point 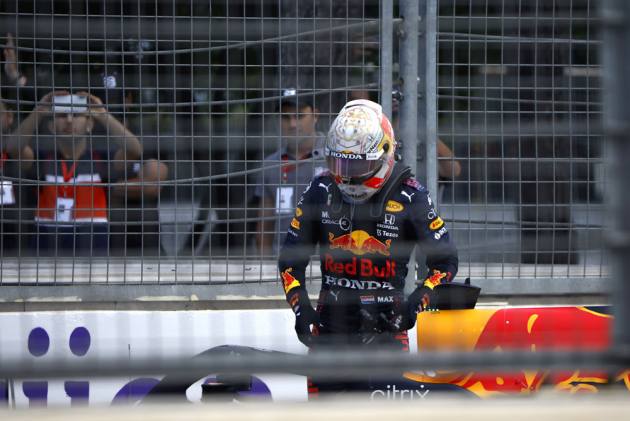 A dejected Max Verstappen declared that "sometimes you can hate this sport" after a late crash cost him victory in a dramatic Azerbaijan Grand Prix. (More Sports News)

Verstappen looked destined to take the top step of the podium in Baku until he suffered a tyre blowout when he was leading with five laps to go.

The Red Bull driver booted his car after smashing into a wall, having missed the opportunity to extend his lead over Lewis Hamilton in the battle for the Formula One title.

Verstappen was able to retain his four-point advantage over Hamilton after the seven-time world champion locked up his tyres and ran into an escape road when the street circuit race restarted for a two-lap sprint.

Sergio Perez celebrated his first victory for Red Bull ahead of Sebastian Vettel, with Hamilton crossing the line in 15th place after being second on the grid when the race got under way again.

Verstappen was left to reflect on what might have been, but the Dutchman said he would not dwell on the cruel setback.

He said: "Frustrating and very disappointing so close to the finish to retire with a tyre blowout.

"It's a big shame. Sometimes you can hate this sport - for a few hours, then I'll be fine again.

"Honestly up until that point it was a great day – the car was on fire, I was just matching whatever I needed to do behind me, I was quite comfortably in the lead. It would have, let's say, have been an easy win. But, of course, there are no guarantees in the sport."

on my own race… But happy for the team and a huge congrats to @SChecoPerez on the win The car, pit stops and strategy were amazing again, thanks to @redbullracing. Not much more to say at this time other than we’ll keep pushing until the end  #AzerbaijanGP pic.twitter.com/Cwxp76LVZO

Verstappen added: "It's a shame because we missed out on the opportunity to make the gap bigger [in the championship] because we know when we get to normal tracks Mercedes normally are very strong. So it's a bit of a shame not to open the gap a bit more.

"Of course then at the end we got a bit lucky with Lewis going straight at Turn 1, so we are still leading the world championship, but it's not the way we wanted it to be.

"I wanted to really open up that gap today and win that race because it would have been great for the team."