Sourav Ganguly, who is often credited for changing the image of cricket -- to a tough one -- was escorted inside the BCCI headquarters in Mumbai by the Old Guard of the Indian cricket -- N Srinivasan, Niranjan Shah and Rajeev Shukla 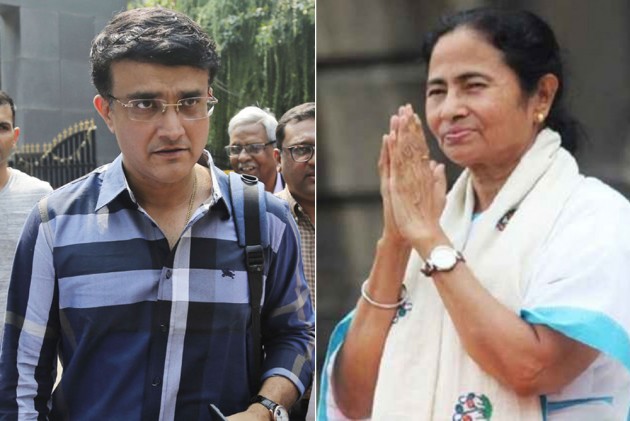 West Bengal Chief Minister Mamata Banerjee on Monday congratulated former India skipper Sourav Ganguly, who is set to be elected as the next president of the Board of Control for Cricket in India (BCCI).

Ganguly, who is often credited for changing the image of cricket -- to a tough one -- filed nomination for the president's post on Monday. He was escorted inside the BCCI headquarters in Mumbai by the Old Guard of the Indian cricket -- N Srinivasan, Niranjan Shah and Rajeev Shukla.

Read: Sourav Ganguly, The Cricketer And A Showman - Career Highlights And Controversies

The 47-year-old emerged as the leading name for the president's post after the affiliated units of BCCI along with the bigwigs held parleys on Sunday.

"Heartiest congratulations to Sourav Ganguly for being unanimously elected BCCI President. Wish you all the best for your term. You have made India and #Bangla proud. We were proud of your tenure as CAB President. Looking forward to a great new innings," she tweeted.

Heartiest congratulations to @SGanguly99 for being unanimously elected @BCCI President. Wish you all the best for your term. You have made India and #Bangla proud. We were proud of your tenure as CAB President. Looking forward to a great new innings.

The man who changed Indian cricket, #SouravGanguly starting his second innings in BCCI. That aggression, practical knowledge of cricket is a great sign for Indian Cricket. pic.twitter.com/7lyUYqmGb0

Started from Cover Drive,
Captained in most crucial phase of Indian Cricket nurtured talents 2000-2005,
Fought against all odds,
Retired but not retired as he will now be BCCI President.

Only 90's kids can understand the contribution of these legends in Indian cricket team. That too when no body was ready to take captaincy due to match fixing cases of indian team. Dada United the team and he is back. The new era of indian cricket has started. #SouravGanguly pic.twitter.com/d7LgCM1UZp

One of the most loved cricketer #SouravGanguly is all set to become the president of #BCCI . Congratulations pic.twitter.com/FKtx5Z500d

They will take control of the world's richest and most powerful cricket board when the tenure of the Supreme Court-appointed Committee of Administrators (CoA) expires on October 23.

However, Ganguly rule will be short as he will have to go in for a cooling-off period from September 2020, under the new rules.

The former India captain has been holding posts in the Cricket Association of Bengal (CAB) for the past five years where he currently serves as president.