Arsenal were not spectacular, but they avoided a third successive Premier League defeat by beating Southampton 2-0 at St. Mary's. 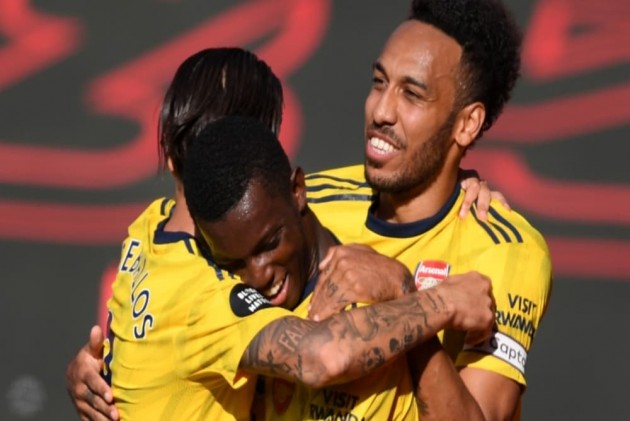 Mikel Arteta got a response from Arsenal as they bounced back from successive Premier League defeats with a somewhat improved performance and 2-0 win at Southampton on Thursday.

The Gunners suffered back-to-back losses to Manchester City and Brighton and Hove Albion following the season's resumption, but they resembled a more focused and resilient unit as they scrapped to a win, unspectacular though it was.

Matteo Guendouzi, fortunate to avoid a retrospective sanction for grabbing Neal Maupay by the throat last Saturday, was the most significant casualty of the Brighton defeat as he was dropped from the squad, but the Frenchman's absence seemed to have no negative impact on Arsenal.

A promising first half saw Eddie Nketiah pounce on an Alex McCarthy error to give Arsenal the lead, and they managed to hold firm under pressure in the second period.

6 - @EddieNketiah9 has now scored six goals from just 11 starts in all competitions this season for both Arsenal (4) and Leeds (2). Pounced. #SOUARSpic.twitter.com/npkbTmm9iL

For all the doom and gloom surrounding Arsenal in recent weeks, they enjoyed a bright start at St. Mary's. Pierre-Emerick Aubameyang tested McCarthy and also hit the crossbar either side of Nketiah having a goal disallowed for offside during the early exchanges.

But Nketiah did score legally in the 20th minute, closing down McCarthy and blocking his attempted pass before tapping into an empty net.

Saints began the second half on the front foot but almost found themselves 2-0 down in the 54th minute. Aubameyang raced on to Emiliano Martinez's drop-kick and attempted to square across goal for Nketiah, only for Jan Bednarek to divert it just past the post.

Shane Long was denied by Martinez before Arsenal eventually made sure of the victory late on.

Stephens tripped Aubameyang as the last man to earn a straight red, and from the resulting free-kick Willock turned in from close range after Alexandre Lacazette's effort fell kindly for him.

What does it mean? Gunners see things out to boost European hopes

Prior to this game, Arsenal had lost 10 points from winning positions in their 12 Premier League matches under Arteta, more than under Unai Emery and Freddie Ljungberg combined. Given the pattern of much of the second half, few would have backed them to buck that trend.

Against a better side they may well have come unstuck, but they did manage to see the win out, moving them back to within two points of Tottenham, who are currently in the final Europa League qualification spot.

Martinez dependable between the posts

With Bernd Leno out injured, Martinez finally has his chance in the Arsenal side and he certainly did not look out of place here. While he was by no means incredible, he made a couple of smart saves and his distribution was good, particularly when releasing Aubameyang early in the second half.

McCarthy does little to help Saints

Clear-cut chances were not exactly frequent for the Gunners – even their opener essentially came out of nothing. McCarthy was too casual when closed down by Nketiah, who capitalised and opened the scoring. He seemed to tempt fate again soon after but got away with it on that occasion.

1 - Six of Joe Willock's eight goals for Arsenal in all competitions have come away from home, with this his first Premier League goal for the Gunners in what is his 26th appearance in the competition. Youth. #SOUARS pic.twitter.com/I7lxiMFszB

- Arsenal registered only their third away Premier League win of the season (W3 D8 L5) with all three wins coming under different coaches (Unai Emery, Freddie Ljungberg and Mikel Arteta).
- Arteta has won as many as games in 18 matches as Arsenal boss in all competitions (W9 D5 L4) as Emery and Ljungberg managed in 26 games combined this season (W9 D11 L6).
- Eddie Nketiah has scored six goals in 11 starts in all competitions this season for Arsenal (4) and Leeds United (2).
- No team has made more errors leading to opposition goals in the Premier League this season than Southampton (10).
- Joe Willock scored his first Premier League goal for Arsenal in his 26th appearance in the competition and with his 13th shot.

Arsenal go to Sheffield United in the FA Cup quarter-finals on Sunday before returning to Premier League action at home to Norwich City the following Wednesday. Saints face Watford at Vicarage Road in the league in three days' time.