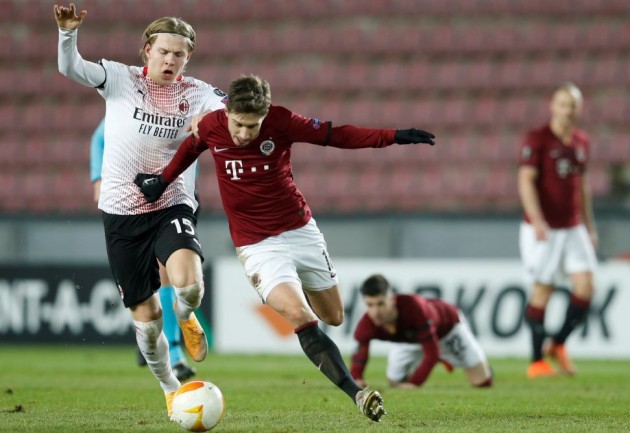 A first-half strike from Jens Petter Hauge sealed all three points for a much-altered Rossoneri, who fielded four players born after January 1, 2000 for the first time.

Despite making seven changes to the team that beat Celtic on matchday five, Stefano Pioli's men still made fairly light work of Sparta, who have now gone eight games without a win over Milan in European competition.

A red card for Dominik Plechaty left Sparta with too much to do, with Milan progressing as group winners after Lille's surprise defeat at Celtic.

4 - For the first time in their history, in the AC Milan Starting XI there are 4 players born after 1/1/2000 (Colombo, Maldini, Kalulu, Tonali). Youthfulness.#SpartaMilan

Hauge opened the scoring in fine fashion 23 minutes in, nutmegging Tomas Wiesner before placing a precise low finish beyond the reach of goalkeeper Milan Heca.

Samu Castillejo was denied a second Milan goal by Heca shortly before the break as the Rossoneri sought to take control.

Sparta threatened little until David Moberg Karlsson's arrival 65 minutes in, the Swede producing a tantalising cross that just evaded the men in red shirts after a bamboozling run.

Once Plecharty was sent off with 13 minutes of normal time left for a poor challenge on Rafael Leao, the contest was effectively over, although Ciprian Tatarusanu had to make a fine one-handed stop to deny Karlsson an injury-time equaliser.

What does it mean? Milan season goes from strength to strength

Despite resting many of his first-team regulars, Pioli was still able to enjoy a victory that sends Milan through as group winners.

The fact they are seeded means a more favourable draw for the last 32 becomes probable and that would boost their hopes of maintaining a domestic challenge for a Champions League return or, perhaps, the Serie A title.

As for Sparta, their European adventure is over for another season.

This was a positive outing for Milan's up-and-coming stars such as Daniel Maldini, Lorenzo Colombo and Pierre Kalulu.

Defender Kalulu looked particularly composed on his full debut, completing more passes (46) and interceptions (four) than any other Milan player.

Plecharty had been leading the way for Sparta in tackles (three), clearances (two), interceptions (two) and possession gained (nine), but spoiled his efforts with a needless and dangerous tackle on the counter-attacking Leao.

Milan host Parma in Serie A on Sunday, when Sparta are also in domestic action against Slovacko.