Khelo India has become a brand, Rijiju said, adding that everybody, including boys and girls want to be part of the programme 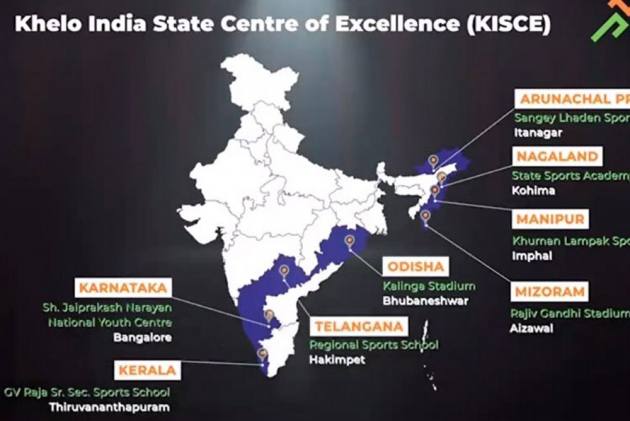 The KISCE inaugurated in other states are Karnataka, Arunachal Pradesh, Kerala, Manipur, Mizoram, Odisha and Telangana.

Speaking on the occasion, the Union Minister of State for Youth Affairs and Sports (Independent Charge) said the central government wants to develop the sports culture in India.

Khelo India has become a brand, he said, adding that everybody, including boys and girls want to be part of the Khelo India programme. Khelo India games is becoming the most popular sporting event in the country, he said.

Rijiju said sports must become a way of life and culture in India.

The Government of India has collaborated with the state governments to create basic facilities for the young boys and girls, he said, adding that India has huge talent in sports but many of them cannot rise because of the lack of facilities.

Rijiju said the government is starting the KISCE on top of the existing National Centre of Excellence in partnership with state governments.

"The ministry is ready to provide necessary financial assistance to ensure that the KISCE develops with proper infrastructure and manpower. Emphasis on making India a global super power with high quality coaching and training," he said.

India is a large country and the target is to move to top 10 in the next Olympic Games, he said, adding that the sports centres will be developed up to the required standards. "We will work hand in hand with the state governments to ensure proper development of the sportsperson in the states," he said.

The priority sports for Nagaland are wrestling, archery and boxing, he said while asserting that Nagaland will make every effort to hone these skills.

"We will make sure that our young Indian sportspersons take up this opportunity in all seriousness in the next four years and make a mark in the history of Indian Olympics following in the footsteps of Dr T Ao and Chekrovolu Swro andmake our great nation proud," he said.