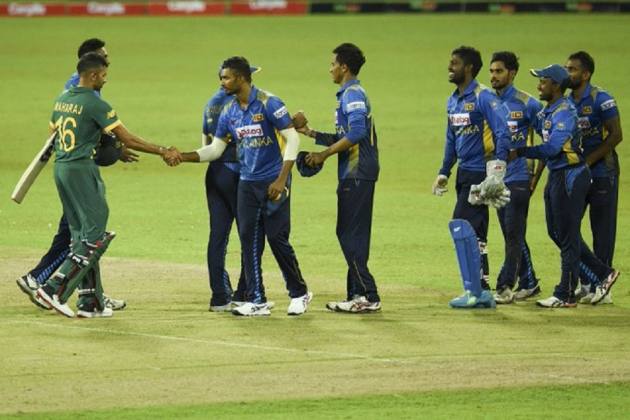 Rain played its part but South Africa, under the new captain, were too good for Sri Lanka in the second ODI match at  Premadasa Stadium, Colombo on Saturday. The start was delayed by 30 minutes, then Sri Lanka's chase was briefly stopped. Meaning, the target was revised. And the hosts crumbled, then suffered a 67-run defeat (DLS). After new captain Keshav Maharaj won the toss and opted to bat first, Janneman Malan played a 135-ball 121 -run knock. Then Heinrich Klaasen punished Sri Lankan bowlers with a 43 off 27 as the Proteas posted 283/6 in 47 overs. Sri Lanka's chase started in an awful manner, losing four wickets for 61 runs inside the first 15 overs. Charith Asalanka (77 off 69), along with skipper Dasun Shanaka (30 off 41) and Chamika Karunaratne (36 off 23), tried to revive the chase even as the target was revised to 265 in 41 overs. But they were dismissed for 197 in 36.4 overs. For the visitors, Tabraiz Shamsi claimed five wickets (5/49 in 7.4 overs) for his maiden fifer. Sri Lanka won the first ODI by 14 runs. The third match is scheduled for Tuesday (September 7). Catch highlights and cricket scores of the second SL vs SA ODI match here:

South Africa scored more than nine per over in the last ten over with Heinrich Klaasen (43 off 27) taking over from Janneman Malan (121 off 135). Reeza Hendricks also scored a fifty (51 off 54). For the hosts, Dushmantha Chameera and Chamika Karunaratne took a brace each.

3:00 PM IST: Players have started warming up and ground looks dry. We can expect the play to start soon

2:40 PM IST: Rain seems to have stopped and weather has cleared in Colombo. Stay tuned for more updates. Wet outfield is currently delaying the start of the match

And the good news is… pic.twitter.com/f5OTZs2YR2