Curry produced a career-high 62 points as the Warriors beat the Portland Trail Blazers 137-122. 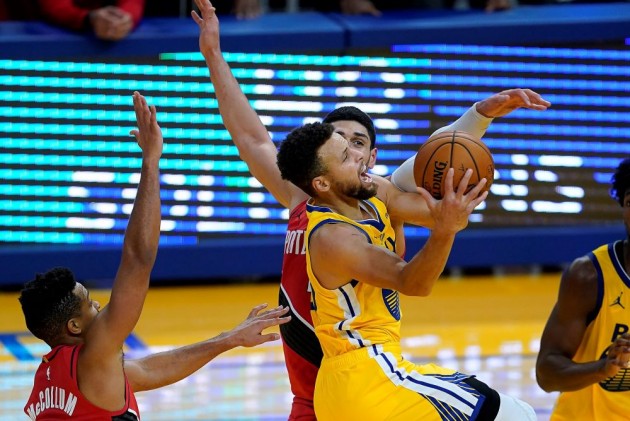 Stephen Curry exploded to lift the Golden State Warriors to victory in the NBA on Sunday, while the Los Angeles Lakers won again.

Curry produced a career-high 62 points as the Warriors beat the Portland Trail Blazers 137-122.

The two-time NBA MVP was in spectacular form, shooting 18-of-31 from the field and eight-of-16 from three-point range.

Damian Lillard (32) and CJ McCollum (28) combined for 60 points for the Trail Blazers.

Make that  for Steph Curry!

The Lakers made it three straight wins by beating the Memphis Grizzlies 108-94.

LeBron James' 22 points, 13 rebounds and eight assists led the Lakers, who had six players in double-digits for points.

Kevin Durant had 28 points, 11 rebounds and seven assists, but the Brooklyn Nets fell to the Washington Wizards 123-122.

Bradley Beal led the Wizards with 27 points and 10 rebounds.

Dillon Brooks had a difficult outing for the Grizzlies. The guard went three-of-15 from the field for just nine points in 29 minutes.

Curry hit a brilliant eighth three-pointer to reach 62 points in the Warriors' win.

The Milwaukee Bucks (3-3) take on the Detroit Pistons (1-5) on Monday. Bucks star Giannis Antetokounmpo is averaging 23.5 points, 11.7 rebounds and 5.8 assists per game this season.