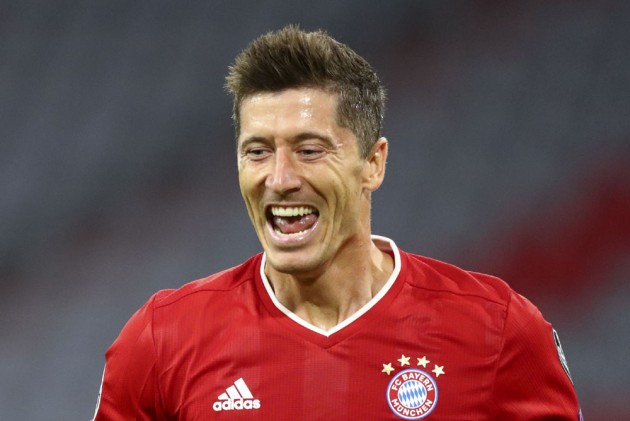 Bayern Munich returned to winning ways in the Bundesliga as goals from Kingsley Coman, Robert Lewandowski and Douglas Costa sealed a 3-1 victory over Stuttgart on Saturday. (More Football News)

The champions were held to a 1-1 draw by Werder Bremen last weekend and although normal service was resumed at the Mercedes-Benz Arena, they did not have it all their own way against Pellegrino Matarazzo's side.

Stuttgart could easily have added to Tanguy Coulibaly's opener midway through the first half but Hansi Flick's men powered back to claim maximum points through fine strikes from Coman and Lewandowski before the break and a late third from Douglas.

The result means Bayern have won 26 of their last 29 top-flight games and helped them open a two-point lead at the Bundesliga summit after Borussia Dortmund dropped points at home to Cologne.

Bayern, who hit the post through Lewandowksi after three minutes, fell behind in the 20th minute when Manuel Neuer failed to cut out Silas Wamangituka's low cross, allowing Coulibaly to slot home his first ever professional goal.

Philipp Forster twice came close to extending the hosts' lead soon after, clipping narrowly past the post from close range and then firing straight at Neuer after being played clean through.

Those misses came back to haunt Stuttgart, with Bayern drawing level seven minutes before the interval when Coman tucked into the bottom-left corner after a flowing counter-attacking move.

Forster then had an effort ruled out after Coulibaly had fouled Neuer before Lewandowski put Bayern ahead in first-half stoppage time, the Poland international drilling past Gregor Kobel from just outside the penalty area.

The game slowed down dramatically after the restart, with the next sight of goal not coming until the 72nd minute when Orel Mangala's attempt was deflected narrowly wide.

Waldemar Anton and Mateo Klimowicz then went close for Stuttgart but Douglas ensured a 19th win in 20 games for Bayern over their hosts three minutes from time, clipping into the bottom corner from 15 yards for his first goal since returning to the club on loan from Juventus.

What does it mean? Bayern aided by hosts' wayward finishing

Bayern were not at their devastating best but they still had enough quality to hold off the threat of Stuttgart. The hosts will feel they should have got something out of the game given they had 15 shots on goal. Their problem? Only four of them were on target.

Flick, meanwhile, will be pleased his side are capable of running out 3-1 winners in a game they never really got going in. It does not bode well for the rest of the Bundesliga.

France international Coman pulled his side level with a sumptuous strike and was a constant menace throughout. His assist for Lewandowski's strike was one of four key passes – the most of any player on the pitch – while he completed 88.9 per cent of his passes, which was the joint-second highest of any Bayern starter.

Forster squandered two golden opportunities to extend Stuttgart's lead in the first half, while he also failed to make a single key pass and lost possession 14 times before he was substituted inside the final 15 minutes.

Flick will likely rest some of his star names for Tuesday's Champions League visit to Atletico Madrid after they sealed their progress to the last 16 as Group A winners against Salzburg in midweek. They then host RB Leipzig on Saturday in the Bundesliga, with Stuttgart travelling to Werder Bremen a day later.