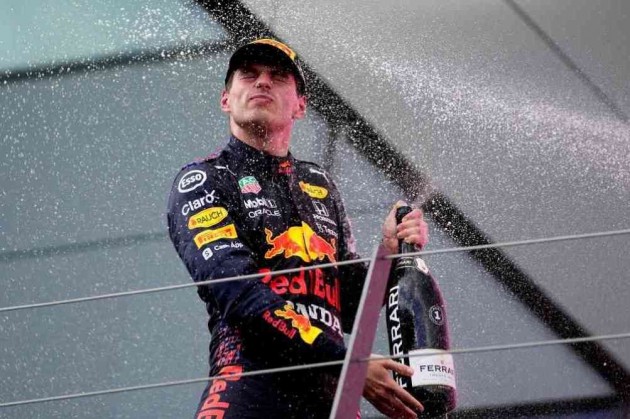 With a clean start from pole, the Red Bull driver denied Lewis Hamilton an early attack and he remained ahead for the entire race, beating his Mercedes rival by more than 35 seconds.

“The car was on fire,” Verstappen said over the team radio after crossing the finish line.

Verstappen won a few tenths from Hamilton in most of the laps and was already more than three seconds ahead of Hamilton after 10 laps.

“Straight away I felt good balance in the car,” he said. “It was good to manage the tires basically from the start. We just kept on going, trying to hit our lap times and that worked really well today.”

It was Verstappen's 14th career win and fourth of the season, increasing his lead over the seven-time world champion in the drivers' standings to 18 points after eight races. A race win is worth 25 points.

Left with no chance to overtake Verstappen, Hamilton pitted again in the penultimate lap and successfully beat the fastest lap time held by Perez at that time, earning him a bonus point though the deficit to Verstappen grew to over half a minute.

“It was a bit of a lonely race, really. I was trying to keep up with those guys but the speed they have... They obviously made some big improvements over the last couple of races,” Hamilton said.

“It was impossible to keep up. I don't know where we are losing all this time.”

Losing 0.25 seconds on Verstappen on the straights left Hamilton with few options. He pushed and reduced the deficit on some laps, but then had to be more cautious on others to protect his tires from overheating.

Racing on its home track in the Austrian Alps, Red Bull stretched its winning streak to four races, as Hamilton's wait for his 99th career victory reached the seven-week mark.

The last time Hamilton went without a win in four straight races came more than three years ago, spanning the last three races of 2017 and the first three of the following season.

Red Bull squandered a potential 1-3 finish with a slow pit stop for Perez, which lasted for nearly five seconds due to an issue with the left-rear tire.

Williams driver George Russell, who is a candidate for Mercedes from 2022 if Bottas were to leave the team, had to retire after two-thirds of the race with a power-unit issue.

The Austrian GP on the same track is scheduled for next Sunday.