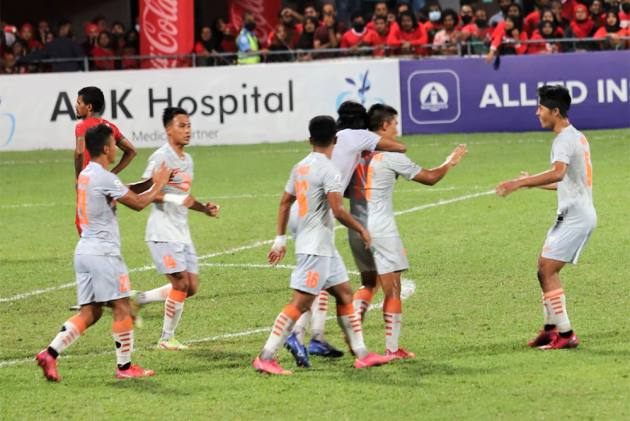 Needing a win to salvage pride and also enter a record-extending 12th final, head coach Igor Stimac decided to start with the XI that took the field against Nepal in their must-win round-robin match on Sunday.

India took a deserved lead in the 33rd minute with Manvir Singh firing in a bullet.

But legendary Maldives striker Ali Ashfaq slotted from the spot just before the break after Pritam Kotal conceded a penalty following a foul on Hamza Mohamed.

After the resumption, a dominant India didn't take long to restore the lead with Chhetri beating the Maldives goalkeeper with a clean volley in the 62nd.

Chhetri, who on Sunday equalled Pele's international goals with his 77th international strike, added one more in the 71st minute to increase India's lead. He connected a Kotal free-kick and headed home.

Towards the end of the match, an animated Stimac was given the marching orders. Subhasish Ghosh soon followed the gaffer with his own sending off in the injury time. But by then, India have done more than enough to book a place in the final, 12th in 13 editions.

But for 37-year-old Chhetri, it was another night to remember. His international tally now stands at 79, just one shy of Argentina captain Lionel Messi's 80. And he's now the third-highest scorer among active players. Portugal's Cristiano Ronaldo, who hit a hat-trick against Luxembourg during their FIFA 2022 World Cup qualifier, leads the chart with 115.

Playing in his 124th match, Chhetri could have easily hit a hat-trick but his 27th-minute header off a Brandon Fernandes corner hit the crossbar.

The win helped India remain unbeaten and top the five-team table with eight points from four matches. But the draws with lower-ranked Bangladesh and Sri Lanka have almost compromised their campaign.

The win against two-time champions Maldives also means that Blue Tigers are on course for a record-extending 8th SAFF title.

India last won the title in 2015 at home, after beating Afghanistan in the Thiruvananthapuram final. India lost to Maldives 1-2 in 2018 final.

Earlier in the day, Nepal and Bangladesh played out a 1-1 draw and book their maiden SAFF Championship final. Maldives finished third in the final standings with six points, ahead of Bangladesh (5) and Sri Lanka (1).