Jennifer Lopez, one of the Super Bowl's half-time acts, got emotional discussing Kobe Bryant's death at her news conference with Shakira 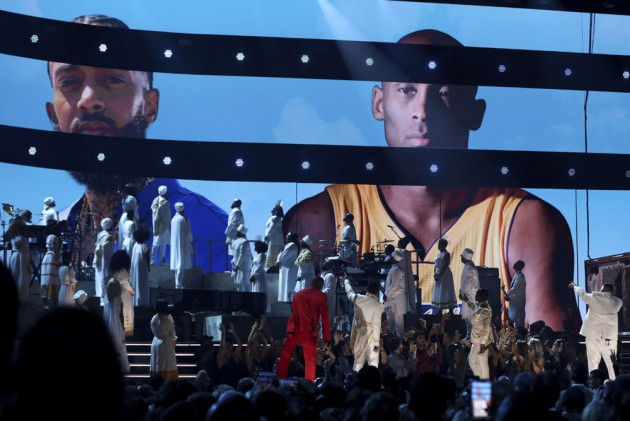 The Kansas City Chiefs will face the San Francisco 49ers at Hard Rock Stadium exactly a week on from the shock death of Bryant and his daughter, Gianna, who were killed in a helicopter crash in California.

Bryant, a five-time NBA champion and 18-time All-Star with the Los Angeles Lakers, was a role model for many of the NFL players that will take to the field on Sunday.

Shakira, who will perform during the interval at the Super Bowl as a co-headliner with Lopez, revealed her long-time boyfriend, Barcelona defender Gerard Pique, was also deeply affected by the news and said she will be thinking of Bryant when she performs on Sunday.

"Gerard, my partner, called me with the sad news, he was affected because he knew Kobe and I knew him too, he went to one of my shows," Shakira said.

"I can't imagine the pain that his family must be going through right now. Life is so fragile and that's why we have to live every moment as intensely as we can.

"I think we will all be remembering Kobe on Sunday and we will be celebrating life and diversity in this country. I'm sure he would be very proud to see the message that we are going to be trying to convey on stage that day.

"I think it's a very important moment for the Latino community in this country. The Super Bowl is a very American event, it's as American as it can get, and I think it's going to be very nice that it's also going to be a reminder of the heritage of this country, which is one of diversity; that's what we will be celebrating on Sunday."

Lopez posted an emotional tribute to Bryant and his family on Instagram and she was choked up discussing the impact it had had on her and her fiancee, MLB great Alex Rodriguez.

"I was in the middle of rehearsing and talking about this show and Alex came to me with tears in his eyes and he said, 'You're not going to believe what happened'," Lopez explained.

"He was devastated. He knew Kobe very well, they came up together and entered sports around the same time. He was just devastated. I knew Kobe and Vanessa more in passing. He had come to my last show in Vegas, the both of them, as a date night. We had a beautiful night that night.

Family. As I scrolled through Kobe’s feed, and Alex and I talk memories and moments we remember about him ... this is the truth that rings out the loudest ... family is what matters most. We are all feeling sadness from this loss, but all I can think of is that it is a grain of sand compared to what Vanessa must going through right now. I am sending all of my love and praying for you, your children and the other families involved in today’s tragic turn of events. The most unfair thing in life is to lose a child and husband on the same day. Vanessa, I pray for your strength and that God guides you each step of the way through this unimaginable heartbreak. To the other families who are suffering from this unthinkable tragedy, may God be with you all. Kobe you meant so much to so many and we will miss you forever. Thank you for your work ethic, your inspiration and your heart. #hero #legend #husband #father ð¢ðð¼ð

"I think it's affecting everybody so much because it's just reminding us again how fragile life is, how we have to appreciate every single moment, how we have to love people when they're here and not wait. How we don't get the opportunity – it can be taken away from us so easily.

"Then I think about Vanessa as a mum and losing her best friend and partner, and losing her child. I think how awful that must for her be right now. I just wanted to send her a message and just been praying that God guides her through every moment because she has three more babies to take care of.

"Just wishing that the nightmare was over but it's not going to be and that's life, we have to carry on but at the same time it affects us and will affect us forever. Hopefully we will remember this moment and what we're trying to do is spread love, kindness and bring everybody together.

"In this week, this happening has a sound around the world that we have to love each other, and we have to be together and support each other. We can't be so at odds all the time and that's part of our mission and message too."