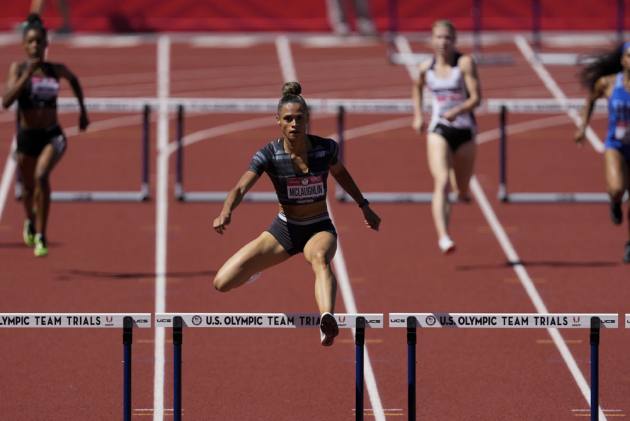 Sydney McLaughlin looked to her left, saw the numbers “51.90,”and knew exactly what that meant. (More Sports News)

She put her hands on her head, then covered her mouth and looked into the night sky.

The 400-meter hurdles world record belongs to her now.

On Sunday night at U.S. Olympic track trials, McLaughlin finally outraced Dalilah Muhammad to earn the victory, and the record, that Muhammad kept grabbing whenever they met.

McLaughlin shattered the record by 0.26 seconds and beat Muhammad by 0.52.

It was a blowout in what had been touted as potentially the best race of the 10-day meet in Eugene. But it set up what could be the best race in Tokyo. Barring something unexpected, the rematch will come Aug. 4 with the Olympic gold medal on the line.

“Truly just faith and trusting the process,” McLaughlin said when asked to explain her breakthrough.

McLaughlin is the 21-year-old who burst onto the scene five years ago, telling stories about her multiple talents, which included juggling and riding a unicycle — and doing both at the same time.

In the five years that passed, McLaughlin went to Bobby Kersee, the coach who got the most out of Allyson Felix, Jackie Joyner-Kersee and Florence Griffith Joyner, among others.

He put McLaughlin on a new plan — getting her focused on form and running shorter hurdles courses.

“It was trusting the process, and a lot of things you can't really see coming,” McLaughlin said.

“But just having the childlike faith in trusting everything is going to work out. Bobby's really good at that.”

Muhammad has had a slow move into form this year. She said she couldn't break 55 seconds when the year started, “so to get a 52 feels pretty good.”

“Maybe it's a blessing in disguise,” she said.

Only time will tell. Not too much time, though.

“She definitely pushes me,” Muhammad said. Then, she turned to McLaughlin and said: “Congratulations, you world-record holder. It's going to be a battle in Tokyo for sure.”