This was Mumbai's second loss in four matches as they slipped to third place behind Bengal who returned to winning ways with a facile nine-wicket win over Services. 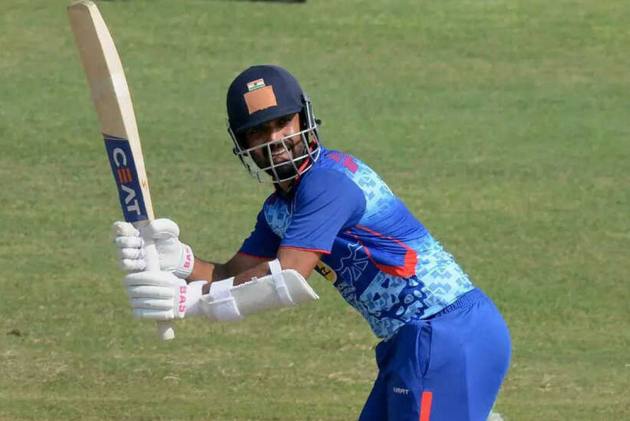 Ajinkya Rahane slammed his third half-century in four matches but that was not enough as Mumbai lost to Chattisgarh by one run in a dramatic finish to their Elite Group B Syed Mushtaq Ali T20 clash in Guwahati, Assam on Monday. (More Cricket News)

This was Mumbai's second loss in four matches as they slipped to third place behind Bengal who returned to winning ways with a facile nine-wicket win over Services to brighten their qualification prospects.

Karnataka (16) consolidated their position atop the Group B standings with four victories on the trot, going four points clear of Bengal with a seven-wicket win over Baroda.

Karnataka will play Bengal, while Mumbai face a must-win task against Baroda in the final group league matches here on Tuesday.

At the Nehru Stadium, Mumbai, in their pursuit of a fighting 157, were reduced to 22/2 in 4.2 overs but the Indian Test vice-captain once again led from the front, hitting two sixes and six fours in his 55-ball 69.

But Rahane fell victim to unheralded Sourabh Majumdar in the first ball of the final over as the 22-year-old seamer defended eight runs to seal a dramatic win.

The Mumbai skipper had the hard-hitting Aditya Tare at the other end but the 34-year-old IPL veteran failed to get a single boundary off the final five balls.

For Mumbai, the poor form of their star player Prithvi Shaw once again hurt them badly as he got out for a duck after being cleaned up by Sumit Raikar in the first over.

Only once, against the Services, the Mumbai opener has got to double digits (14) and in the remaining three matches he has scores of 4, 6 and 0.

The talented Yashasvi Jaiswal (4) too failed to get going and became their second wicket inside the power play and it was once again left for the duo of Rahane and Siddhesh Lad (46) to rebuild the innings.

Shashank Singh was the star for Chattisgarh, hitting a blistering 28-ball 57 (4x6, 4x4) to power them to 157/5 after Amandeep Khare opted to bat.

Chhattisgarh got off to a jittery start to be 6/2 inside two overs but Akhil Herwadkar anchored the innings with a 56-ball 53 in an entertaining 80-run partnership with Singh.