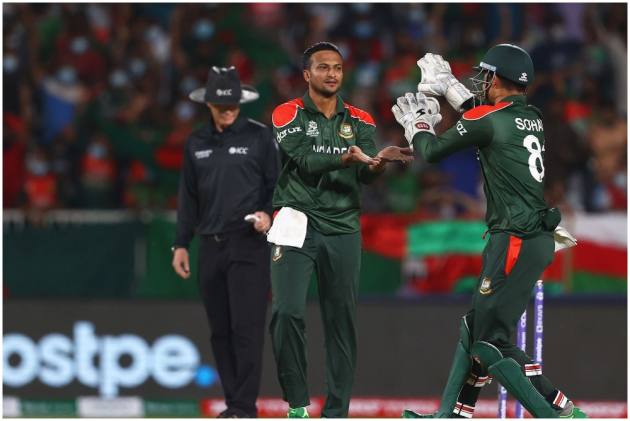 Bangladesh all-rounder Shakib Al Hasan has expressed they can play ‘more freely’ now after the Bangla Tigers made their way to the T20 World Cup Super 12 stage following their huge 84-run win over Papua New Guinea on Thursday.

Playing in a must-win game, Bangladesh posted a mammoth 181/7 in 20 overs before bowling out minnows PNG for just 97 in 19.3 overs. The other team to cruise to the Super 12 stage from Group B was Scotland who defeated Oman by eight wickets.

“We need to play very well throughout this tournament to give ourselves a chance and now the pressure is gone, we can express ourselves and play with more freedom,” Shakib, who bagged the Man of the Match award for his 37-ball 46 and 4/9 in his four overs.

Bangladesh started their campaign with a shock loss against Scotland on the opening day before they were back on track with a win over Oman. For Shakib, every game gives them more confidence.

“I think every game we play, the confidence grows. Obviously, losing our first game was a setback but in a T20 format, whoever plays well on the day will win,” he added.

Not only Bangladesh, but Shakib also grew in confidence. He was out for just 20 against Scotland but came back in form with two back-to-back 40-plus scores.

“It is not easy to get back into form when you are not scoring runs but luckily for me, I am getting more opportunities to bat up the order here, so I need to make sure I stay on the wicket and give myself a chance to score runs for the team,” he added.

The 34-year-old also etched his name in history as the wicket of PNG’s Hiri Hiri moved him level with former Pakistan captain Shahid Afridi on 39 ICC Men’s T20 World Cup wickets - the most ever.

Shakib is also one of the three players to have scored 10,000 international runs and taken 500 wickets, alongside Jacques Kallis and Afridi.

He is also the only player to have scored 1,000 runs and taken 100 wickets in T20 internationals and is the all-time leading wicket-taker, surpassing Lasith Malinga in the shortest format of the game.