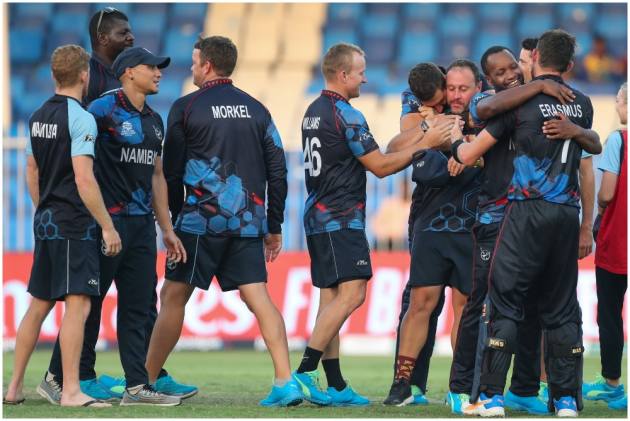 Namibia on Friday made history by making the Super 12s on their ICC Men’s T20 World Cup debut but coach Pierre De Bruyn said his team is not done yet and promised a competitive showing against big sides like India, Pakistan and New Zealand. (More Cricket News)

Namibia beat Ireland in their final group match on Friday to qualify for Super 12s. “Yeah, look, it’s time for us to reflect and also enjoy this moment, but we certainly didn’t come here just to go and lie down now,” de Bruyn said.

“Facing India, Pakistan, New Zealand, those type of teams is going to be a great experience for these players, but you know, we want to be competitive in whatever we do, with ball, bat, in the field, the way we present ourselves, the way – we’re going to compete, so we’re looking forward to that.”

It is a significant achievement for a small country like Namibia which has a population of 25 lakh. However, the team has shown what it can do even with limited resources.

“We’ve made history now, advancing to the Super 12. First time ever we’re going to play against these guys in a T20 World Cup. We are going to enjoy the next 24 hours or so and then we’re going to sit down as a group again and we’re going to put some goals on the table,” said de Bruyn.

“But when it comes to the normal resources if you measure yourself against full members, we’re way off in terms of our facilities, full-time coaches, full-time SNCs, doctors, all of that. But we’ve got a saying that we’ve got to find a way.”

De Bruyn feels it is important to make the best of opportunities at the big stage.

“As a coach myself, I’ve really made sure that the players and us as a group, we just use our opportunities. We don’t have everything, but these times like we’re sitting here winning a cricket game knowing that we’re going to the next World Cup.

“We know financially it makes a difference and we can upscale and we can invest a little bit more in our resources,” he added.