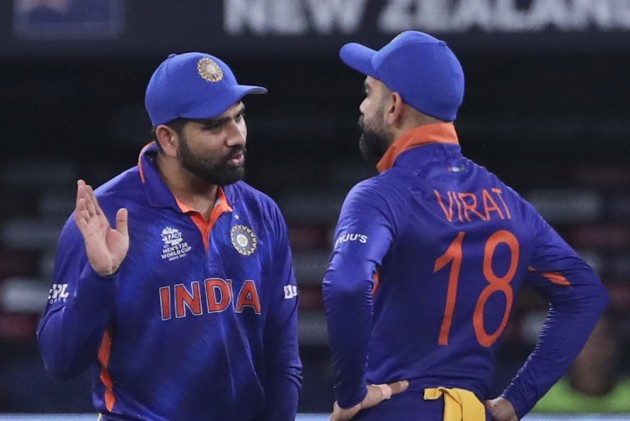 After suffering two humiliating defeats in Dubai, UAE, the pre-tournament favourites and 'hosts' India now face an ignominious early exit from the ICC Men's T20 World Cup 2021. Virat Kohli & Co started their Super 12 campaign on an abysmal note, losing by 10 wickets to Pakistan, who themselves consigned the Indian jinx with that scintillating performance. In fact, Babar Azam & Co have become the first team to qualify for the semifinals after their win over Namibia on Tuesday (November 2).

Seven days after their defeat to Pakistan, India produced another clueless performance against New Zealand in their second Group 2 match. Result! An eight-wicket thrashing with 33 balls to spare. It also means that Indian cricketers, who have been camping in the UAE for some time, will have to pray harder than they play, for the semi-final qualification chances are out of their hands. They need favours from other teams. Such ignominious plight for a team with an ensemble of superstars!

But India were ruthless against Afghanistan and Scotland in their next two outings. Those two wins helped their slip semi-final hopes alive.  They defeated Afghanistan by 66 runs, then hammered Scotland by eight wickets with 81 balls to spare.

The top two teams from the group qualify for the semis. Here's a look at the scenarios, in brief. And it requires some wishful thinking!

With four wins in four outings, Pakistan are in the last four of the tournament. They have defeated India, New Zealand, Afghanistan and Namibia. Pakistan face Scotland in their final group match, and they are likely to end with five wins in five.

That leaves five teams fighting for the second spot. And New Zealand are the favourites to take that spot, with a maximum of eight points (if they win their last match against Afghanistan on Number 7). Bouncing back in style after losing to Pakistan in their opener, Kane Williamson & Co have won three on the trot, with the latest coming against Namibia. Now, they just need to beat the Afghans. With four wins in five, nothing can stop them from making the last four.

After the end of India vs Scotland match, the Group 2 standing looks like this:

Scotland and Namibia are out of the semi-final race.

India will most likely finish with six points. Virat Kohli & Co play their final group match against Namibia on November 8 in Dubai. But their undivided focus will on what Kiwis do against Afghanistan. If Kane Williamson's BlackCaps keep winning, there's nothing that the inaugural champions of T20 World can do. So, their hopes now pin of Afghanistan.

For Mohammad Nabi & Co, their clash against New Zealand becomes a virtual quarter-final. So, the fixture to look out for in this group remains the meeting between New Zealand and Afghanistan in Abu Dhabi on November 7. Afghans have dented their semis hopes by losing to India, and that too by a big margin.

The only advantage for India is they will play the last game in the league stage, against Namibia on November 8. By then, they will know what to do.

But it will not be as simple as it sounds. As the tournament progresses, more scenarios will emerge, making the previous calculations redundant.

For the record, India are the official hosts. The tournament was moved to Oman and the UAE due to the coronavirus pandemic.