Rahul Chahar picked up 13 wickets from 11 games in the Indian Premier League 2021, while Yuzvendra Chahal got 18 wickets in 15 games. 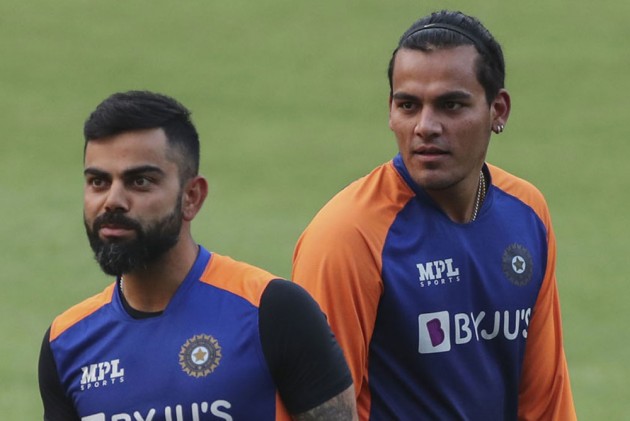 India captain Virat Kohli on Saturday admitted that dropping a proven performer like Yuzvendra Chahal was a tough call but the Haryana leg-spinner's lack of pace off the surface on the slow UAE tracks tilted the scales in favour of the quicker Rahul Chahar. (More Cricket News)

Rajasthan's Chahar picked up 13 wickets from 11 games in this edition of IPL for Mumbai Indians but was benched during the end stage. Chahal, with 18 wickets in 15 games, was the second highest wicket-taker in the RCB team behind Harshal Patel's 32 scalps.

"It was a challenging call but we decided to back Rahul Chahar for a reason that he has bowled amazingly well in the last couple of seasons and a guy who bowls with pace," Kohli said at the ICC captain's press conference ahead of the T20 World Cup.

The skipper reiterated that Chahar's consistency over a period of time was taken into consideration during the selection meeting for picking the team.

"Rahul did really well in Sri Lanka and against England at home as well. He was someone who bowled those difficult overs," he said and then explained the rationale.

"We believe getting into the tournament, wickets will be getting slower and slower. Guys who bowl with a lot more pace as you saw in the later stages of the tournament as well, were the ones who were able to trouble the batters and probably not give the ball too much air."

These are strengths that make Chahar a wicket-taking candidate, he said.

"Rahul has those strengths naturally as a leg spinner as someone who attacks the stump, areas that can potentially get you wickets at any stage. That's the factor that tilted the balance towards Rahul, but not taking anything away from Chahal, and this was a tough call.

"Picking a World Cup squad is always like you have only a number of spots and you cant put in everybody," he was categorical.

Kohli also stood behind senior pacer Bhuvneshwar Kumar, who hasn't got much swing in the UAE during the IPL.

"His economy rate continues to be top notch, something that he has always been known for and experience comes to the fore under pressure as you would have seen the last IPL league game that we played against SunRisers Hyderabad. He had to close the game against ABD, probably one among the two or three destructive finishers in the T20 game.'

"That explains the volumes of experience that Bhuvi brings on the field and just understanding hitting the areas according to the dimensions of the field and balls to bowl at what time, he bowls lengths so well and consistently, which is not an easy thing to get away with in T20 cricket and specially with the new ball. It's quite an under-rated thing."

As experience can't be bought, Kohli knows what his seasoned pacer brings to table is priceless.

"I think his experience and accuracy is priceless for the team and is back to full fitness which augurs well for the team, and I am sure with new ball he will get some kind of assistance in the tournament, whatever little is there on offer and knows how to make maximum use of that, as I said that's going to be priceless for us," he said.

Ravichandran Ashwin is back in white ball team after four years and Kohli attributed it to his courage against big-hitters.

"One thing that Ashwin has improved a lot is bowling with a lot of courage in white ball cricket if you saw the last two years IPL, he has bowled the difficult overs and bowled against top players, the likes of Polly (Pollard) and power-hitters and not being shy to put the ball in right areas," he explained.

"Ashwin believed in his skill sets. He was bowling with variations and control over the pace and when he was at his confident best, these guys can go in there and change the game themselves."

"Ashwin has been rewarded for reviving his white ball skills and he was regular feature for us back in the day then fell off a bit because wrist spinners were in demand mostly but now finger spinners with accuracy have come back in the game.

"I think we also have to evolve as a team and with evolving trend of the game, Ash and the likes of him and Jadeja, performing with a lot of courage augurs well for the team. You can also be very consistent as finger spinners and know what to do in what situations," the skipper seemed confident.

His fantastic relationship with outgoing head coach Ravi Shastri has been well documented but for Kohli, more than any trophy, what will stay is the team culture that they created.