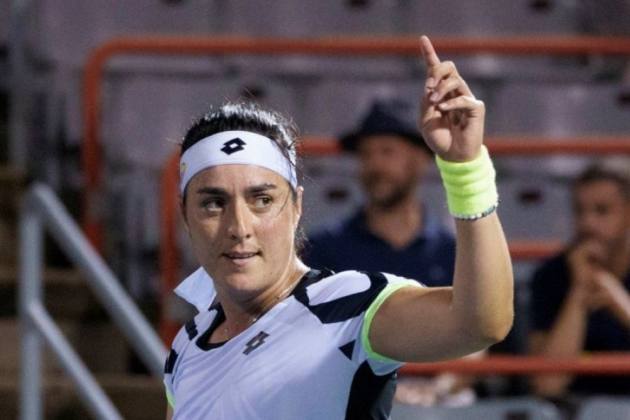 Ons Jabeur of Tunisia beat the second-seeded Andreescu 6-7 (5), 6-4, 6-1 in a match interrupted by rain for about an hour in the middle of the second set.

“I told her she better win now,” Andreescu said.

The 13th-seeded Jabeur will face the winner of the late match between Americans Danielle Collins and Jessica Pegula.

In June in Birmingham, England, the 26-year-old Jabeur won the Viking Classic to become the first Arab player to win a WTA Tour singles. She used the long break to look at stats with her team and find ways to improve her game.

“I wanted to see what I was doing wrong because I knew it was very close,” she said, adding that focusing on her first serve made a big difference.

The 21-year-old Andreescu won the 2019 tournament in Toronto to become the first Canadian winner in the event since 1969. She also won the 2019 U.S. Open.

“I'm super disappointed in how I played,” Andreescu said. “But at the same time, Ons played super well. And I tried to play my best with what I had today. I know I could have won this tournament again.”

Top-seeded Aryna Sabalenka of Belarus beat Marino 6-1, 6-3 in the afternoon.

The 30-year-old Marino, a wild card ranked 220th, made it to the round of 16 by upsetting 16th-seeded Madison Keys and 31st-ranked Paula Badosa.

"It didn't matter who I was going to play. I just wanted to leave it all on the court and give it my best shot,” Marino said. “In my heart, I feel like I belong with these players, I belong at this level. And I feel the results demonstrated that. … I'm glad I got to show everyone how I play.”

Sabalenka, ranked No. 3, saved four break points to cruise to a 5-0 lead in the first set. Marino showed life in the second set with a pair of aces and held serve through the first six games. But she struggled with break points, going 0 for 5 in the match.

“For her, it was nothing to lose today and the crowd was supporting her, so she kind of was in a good shape and good mood,” Sabalenka said. “So I was trying to not give her any opportunities to come back in the match or even to put any pressure on me. I was kind of aggressive from the beginning to the end. It's dangerous to play against players who have nothing to lose.”

Camila Giorgi of Italy beat seventh-seeded Petra Kvitova of the Czech Republic 6-4, 6-4. She will face 15th-seeded Cori Gauff of the United States. Gauff advanced in a walkover after Johanna Konta of Britain withdrew because of a knee injury.