All-rounder Ben Stokes was England's century hero as they drew level with Australia in the Ashes series after a stunning win at Headingley. 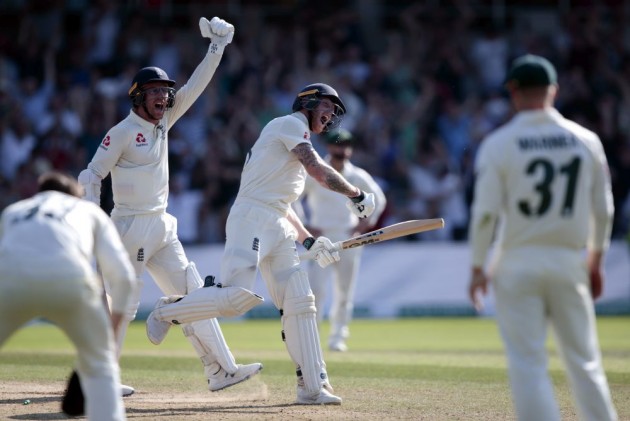 Ben Stokes said his match-winning century at Headingley was "right up there" with his role in England's Cricket World Cup triumph. (THIRD TEST, DAY 4 HIGHLIGHTS | SCORECARD)

England kept the Ashes alive with a thrilling one-wicket win over Australia in the third Test - Stokes the hero after a brilliant 135 not out. (CRICKET NEWS)

He was also England's key man in the World Cup final against New Zealand on July 14, and six weeks on from that success he was the toast of the team again, with the hosts drawing level at 1-1 with two Tests to play.

Asked how it compared to the World Cup experience, all-rounder Stokes said on Sky Sports: "It's right up there. We had to win this game to stay in the Ashes and we've managed to do it.

"We've got to move on to the next game now. We've managed to keep our hopes alive of doing the double.

"We're going to take a lot of momentum. It's nice having a break to get away and recharge the batteries and hopefully hit the ground running again in Manchester [in the fourth Test, starting on September 4].

"It's unbelievable, one I'll never forget. I'll just have to take it all in because I'm not sure that'll ever happen again. That was one of the top two feelings I've ever had on a cricket field."

Stokes said the key to his innings was the mindset to "just never give up really ... it's not over until it's over".

When last man Jack Leach came to the crease at 286-9, England were 73 runs short of their target.

Leach made one not out, as Stokes blazed boundaries around the ground, including one astonishing reverse slog-sweep for six.

Stokes said: "When Leachy came in it was pretty clear what had to be done.

"Leachy's done it before – a super nightwatchman, ended up getting 92 [in the Lord's Test against Ireland] – so I backed him knowing what he had to do.

"I couldn't watch the balls going down. I was just waiting to see what happened and ... phew, man.