Tim Paine hailed star batsman Steve Smith after the 30-year-old steered Australia to victory in the Ashes opener against England. 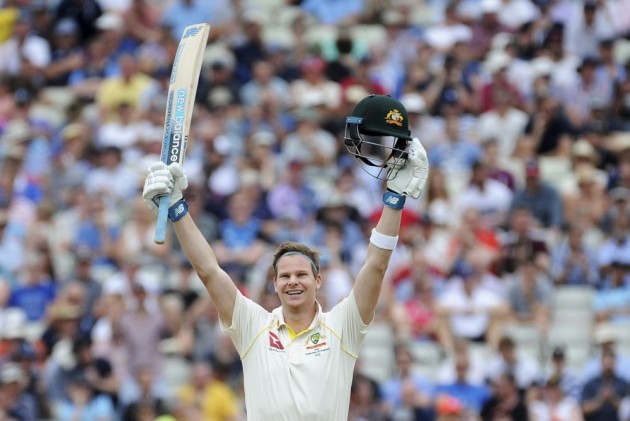 Paine's side stole a march in the five-match series thanks largely to the heroics of former captain Smith, who made centuries in both innings on his first Test back since a ban for his involvement in the ball-tampering scandal that rocked cricket.

Smith's efforts in the first innings proved particularly important as he helped Australia recover from a perilous position of 122-8 to 284 all out.

And Paine, who replaced Smith as skipper, is running out of superlatives for Australia's key batsman.

"I thought we were certainly up against it at that stage [122-8] but we had the best player in the world at the crease," Paine said of the man of the match at the presentation.

"Steve showed his class in both innings. We're running out of things to say about Smithy. He's probably the best Test batsman we've ever seen. We're lucky to witness it."

Smith's second century coupled with a three-figure score from Matthew Wade on Saturday left England chasing the unlikeliest of targets at 398.

Our Aussies take a 1-0 series lead and claim 24 points in the World Test Championship with an inspirational win at Edgbaston!

Nathan Lyon took centre stage on a deteriorating pitch on Monday as his 6-49 helped dismiss England for just 146.

"Nathan bowled superbly but our three quicks took a lot of pressure off him at the other end as well. The seamers were sensational," Paine added.

"We thought we could improve on our first-innings performance with the ball. All those guys are world-class performers. This morning all four of them were sensational.

"We know every Test we play in England, the crowd will be against us. I thought the guys handled themselves really well and we've come out on top."

Smith was banned for 12 months by Cricket Australia for his part in the Newlands scandal and he reflected on an emotional week.

"Maybe a while ago I thought that [he wouldn't be playing again] but I'm really grateful to be back here playing for Australia, scoring runs, doing what I love and contributing to wins," Smith said.

"It's been a pretty special comeback. I'm over the moon to be standing here.

"It's been a long 18 months for me and my family and friends and they helped me through it back home. I'm really thankful for that. I don't know if it's really sunk in yet.

"It's been a hell of a six weeks. I've really enjoyed playing here in the World Cup then this Ashes series is the ultimate challenge for an Australian and English cricketer."