The Fight For Audi: Ravi Shastri Reveals How Pakistan Legend 'Would Go To Any Level' To Distract Him

The Audi 100 sedan that Ravi Shastri won at the World Championship of Cricket in 1985 remains the symbol of cricketing richness, and the former Indian all-rounder has a good story to tell 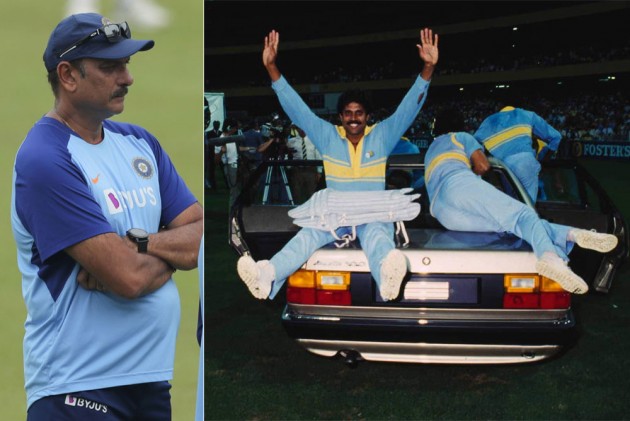 The scene of Indian cricketers riding an Audi after defeating arch-rivals Pakistan in the final of the 1985 World Championship of Cricket at the Melbourne Cricket Ground remains one of the most enduring images of Indian sports. That car, won by Ravi Shastri, has since become a symbol of cricketing richness in all senses. (More Cricket News)

Consider this, it was pre-liberalisation period and there were very few luxury cars for common citizens in India. In fact, the then Prime Minister Rajiv Gandhi had to order customs officials to waive off the heavy import duty so that the star cricketer can bring the car home for a good ride.

Talking about it, Shastri had once said that he "still get goose bumps" thinking about the moment. Shastri cherished that car so much that even his father had to ask for permission to drive, because it doesn't belong to him, but to India.

Well, the car, like any other 'trophy' needed some winning. And the main threat Shastri faced was from legendary Pakistan batsman Javed Miandad. But the Indian all-rounder, who scored 182 runs and took eight wickets in five matches in the tournament, knew it was his.

The current Indian head coach said that Miandad "had no chance of getting the Audi," but the Pakistan captain "had to needle" him so that he "would get distracted."

"I mean, when we played against each other, there was constant chat between Javed and me. There will always be needling," Shastri said during ' Sony Ten Pit Stop' show on channel's FB page.

India, the reigning world champions after defeating mighty West Indies in the 1983 finals, entered the tournament with high hopes under a new captain, Sunil Gavaskar.

And they won all their group matches, including one against Pakistan, then went on to beat New Zealand in the semis by seven wickets with Shastri taking three wickets besides scoring 53.

Pakistan defeated the Windies, also by seven wickets to set up a mouth-watering final against India.

In the final, Shastri scored an unbeaten 63 to help India chased down Pakistan's 176/9 with relative ease. Miandad, the captain, himself top-scored for Pakistan with a patient 48 off 92 balls. India won the final by eight wickets with 17 balls remaining.

"He was a great player, he was a great competitor. He would go to any level to get under your skin and make sure you’re distracted. He had no chance in that final. My eyes were on that car. Even though he might have wanted to distract me, he had no bloody chance," Shastri added.

Shastri also shared a hilarious anecdote about a team meeting before the final and about the Audi.

"Kapil [Dev] said, 'if I win car, I keep 25 percent (by selling) and rest share. Jimmy came and (said) "Yaar jisko mila mila' (whoever gets it, gets it). When my turn came, I said, if I win it, I am keeping the car and I can only share the stepney," Shastri said.

All the individual awards were won by Indians -- Shastri, the Champion of Champions for being the man of the tournament, Krishnamachasri Srikanth, most runs with 238 runs and Laxman Sivaramakrishnan, most wickets with 10 scalps. In fact, the Indian team was adjudged "The Indian Team of the Century" by Wisden.

Shastri himself was convinced that the class of India's 1985 team, of which he was a vital cog, was such it could trouble even the current team led by Virat Kohli.

"No question about that. They (team of 85) will give any team that India puts up in white ball cricket, a run for their money. That team of 85 will give this team a run for money," Shastri added.

Shastri also has a firm belief that the team of 1985 was qualitatively better than the side that won the 1983 World Cup because it was a perfect blend of youth and experience.

"You know, I was part of both teams, I played in the 1983 World Cup and 1985, when you look man to man, 80 per cent of that 83 team was still there, but then some of the youngsters that you got in there like a Sivaramakrishnan, Sadanand Vishwanath, Azharuddin, those kind of guys came in to add to the experience you already had of 83 (and it) was fantastic," the 57-year-old added.