The Masters: Dustin Johnson In Four-Way Tie For Augusta Lead, DeChambeau In Trouble

Bryson DeChambeau headed into the Masters in bullish mood, yet the big hitter appears at risk of missing the cut at Augusta. 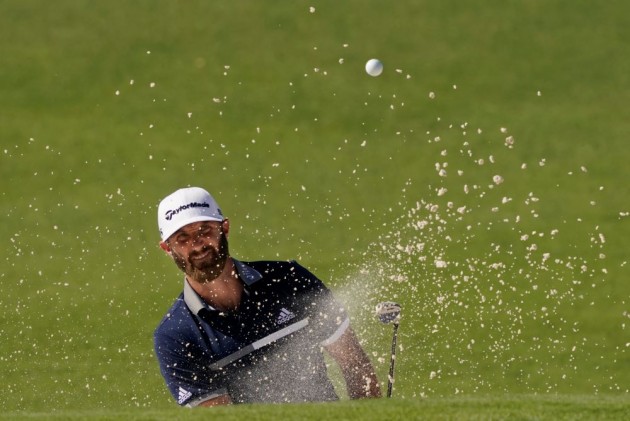 Bryson DeChambeau faces a challenge to make the cut at this year's Masters as four players shared the lead at the end of day two at Augusta.

Masters debutant Abraham Ancer, Cameron Smith, Justin Thomas and world number one Dustin Johnson are all on nine under at the top of a congested leaderboard.

However, after his difficulties on day one drew plenty of attention, DeChambeau is in real danger of missing out on playing in the final two rounds in Georgia at the rearranged major.

Having proclaimed he was going to play Augusta as if it was a par 67, DeChambeau carded a 70 in his opening round but had slipped back to one over for the tournament when play was halted due to bad light.

DeChambeau will need to be inside the top 50 including ties to sit the right side of the cut line, though he made a dismal start on Friday when he hit a triple bogey on the third.

The U.S. Open champion dropped further shots at the fourth, fifth and seventh, though that error was wedged between two birdies in an up-and-down front nine.

Yet another bogey followed on the 10th, but DeChambeau closed out for the day with a birdie on the 12th and launched a drive over the trees to leave himself in with a great chance of an eagle on the par-five 13th when he returns to finish off his round.

Play was suspended at 5:30 PM EST due to darkness. The second round will resume at 7:30 AM EST on Saturday.

If no further delays occur, the third round will begin at approximately 10:30 AM EST.

Live coverage will resume at 7:30 AM EST on ESPN and https://t.co/VlktfYOZUc. pic.twitter.com/X1bI1lm3G3

Jon Rahm, meanwhile, looks well set to make it a five-way share for the lead when he starts again on Saturday, having left himself a six-foot putt for birdie on the 13th green.

Overnight leader Paul Casey dropped his first shot of the day with a bogey at the 10th - he sliced his third right across the green - to sit on six under through 12 holes, while Lee Westwood moved himself back to three under before the hooter went.

Tiger Woods was in indifferent form through his opening nine holes as he remained on four under, while Hideki Matsuyama is just one stroke off the lead with three to play thanks to a birdie on the 15th, with Sungjae Im and Patrick Cantlay also on eight under.

Brooks Koepka enjoyed a strong finish to his round, successive birdies on his final two holes moving the former world number one to five under.

"I need to clean it up for the weekend if I want to win. No three putts," he told Sky Sports. "I feel fine, I am glad to be done, go put my feet up, go work out – not that excited as I have got legs today, it's going to be a long day.

"My body feels great, just need to clean up those sloppy mistakes."