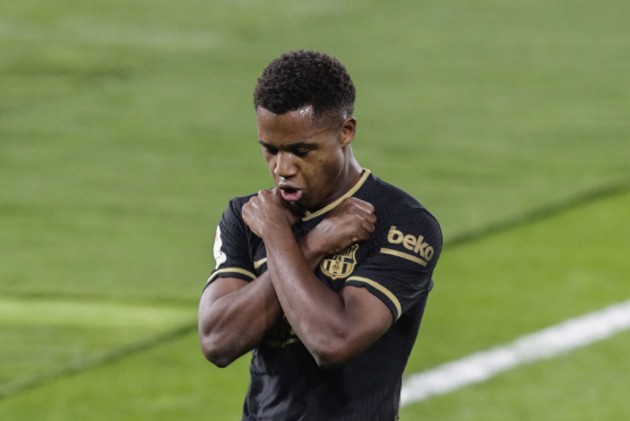 Spain head coach Luis Enrique backed Barcelona sensation Ansu Fati to pick up from where he left off once he has recovered from a knee injury. (More Football News)

Fati will spend four months on the sidelines after undergoing surgery on a tear to the internal meniscus of his left knee – an injury sustained in Saturday's 5-2 LaLiga win over Real Betis.

The 18-year-old has been in great form for Barca this term, scoring five goals and assisting two more in 10 appearances in all competitions.

Among a number of other records, he became the youngest ever scorer for Spain with his goal against Ukraine in September.

That was one of four caps earned under Luis Enrique and the former Barcelona coach is confident the teenage attacker will find his best form once he returns to action.

"Regardless of how old you are, injuries are part of football," Luis Enrique said at a news conference ahead of Wednesday's friendly with the Netherlands.

"It is a sad moment but he will overcome it. He will be the old Ansu again."

join us in wishing Ansu a full and speedy recovery! pic.twitter.com/TkibF1PqE4

Fati's absence could give the likes of Alvaro Morata and Marcos Llorente a chance to shine in attack against the Netherlands.

Atletico Madrid midfielder Koke is back involved for the first time in over two years, while team-mate Llorente is in line for his maiden cap this international window.

"Morata is here because he has the confidence of his coach. He has a strong profile," Luis Enrique said.

"Llorente is almost already playing as a forward at Atletico now as the second striker.

"The normal thing is to change your position, becoming deeper in your role, but with Llorente it is the other way around."

Spain enter the midweek friendly in Amsterdam on the back of a surprise 1-0 Nations League loss to Ukraine last month.

La Roja have won only two of their five matches this calendar year but Luis Enrique insisted all that matters is that his side peak in time for next year's rescheduled Euro 2020 finals.

"These games will help us to see all the players," he said. "But after playing these three games we still won't know what we have for the European Championships.

"That will be seen in the tournament itself, where we can do very well. We'll see. I like what I see. You have to be optimistic and positive. Spain's real level will be seen at the Euros."