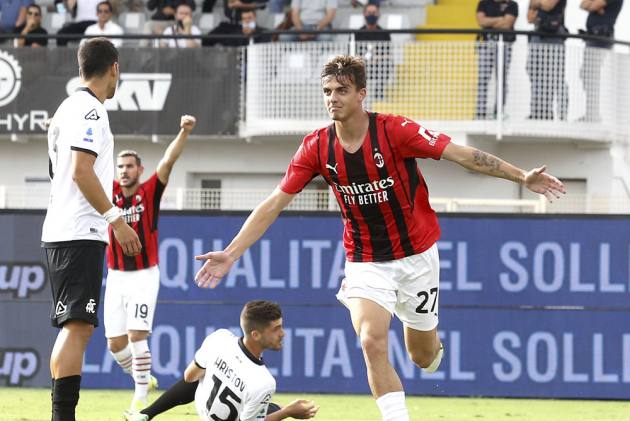 There was a third generation of the Maldini family to score in Serie A on Saturday as Daniel Maldini helped AC Milan to a 2-1 win at Spezia.

Daniel Maldini scored his first Serie A goal 13 years, 179 days after the last league goal netted by his father Paolo — against Atalanta in 2008 — and 60 years, 22 days after his grandfather Cesare scored against Catania in 1961.

Paolo Maldini, who is now a technical director at the club where he made more than 900 appearances as a player, jumped out of his seat in celebration at the goal shortly after the restart.

Milan moved top of the league, a point ahead of Napoli, which plays Cagliari on Sunday.

It was Daniel Maldini’s first start for Milan and the 19-year-old broke the deadlock three minutes into the second half as he headed in a cross from Pierre Kalulu and it was too powerful for Spezia goalkeeper Jeroen Zoet to keep out.

It appeared as if Spezia had snatched a point when Milan midfielder Sandro Tonali deflected in Verde’s effort but once again Rossoneri coach Stefano Pioli’s substitutions paid off as Díaz — who had only been on the field for five minutes — steered in the winner after a great move by Alexis Saelemaekers.