Thisara Perera became the ninth player ever to hit six sixes in an over. But in international cricket, only Herschelle Gibbs, Yuvraj Singh and Kieron Pollard - have achieved this feat 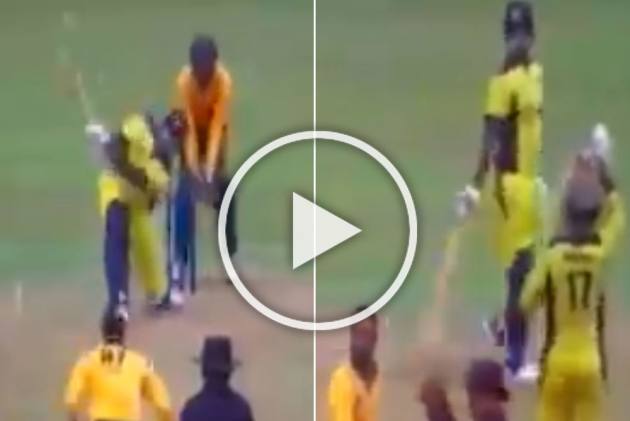 In a truncated to 41-overs-a-side match, the Army Sports Club captain walked in to bat at No. 5 with 20 balls remaining in their innings. The all-rounder then hit Dilhan Cooray for six sixes in an over. The offspinner ended up conceding 73 runs in four overs.

The match was, however, declared a no result with rain playing spoilsport. Bloomfield Cricket and Athletic Club were struggling at 73/6 after 17 overs in the chase of Army Sports Club 318/3.

Perera, in the process, also became second-fastest to hit a half-century in List A. He remained unbeaten on 52 off 13 balls. The record for the fastest fifty is in the name of former Sri Lanka allrounder Kaushalya Weeraratne, who smashed a 12-ball half-century for Ragana Cricket Club against Kurunegala Youth Cricket Club in November 2005.

For the record, Perera became the ninth player ever to hit six sixes in an over in professional cricket. But in international cricket, only Herschelle Gibbs, Yuvraj Singh and Kieron Pollard - have achieved this feat.

West Indies legend Sir Garfield Sobers was the first-ever player to smash six sixes in an over.

In 1968, Sir Garfield Sobers became the first man to hit six sixes in an over in first-class cricket ðÂÂÂÂÂÂÂÂÂ

6 sixes in an over in a professional game: