Tokyo 2020 Archery Qualifiers, Live Streaming: India Women Firm Favourites To Make The Cut - When And Where To Watch 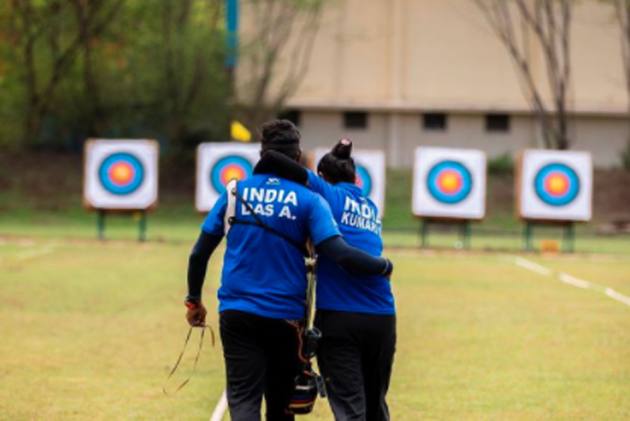 On a high after winning a World Cup gold in the first stage, the Indian women's recurve trio of Deepika Kumari, Ankita Bhakat and Komalika Bari will start as firm favourites to grab the team's quota from the final Tokyo 2020 Qualifier in Paris on Sunday. (More Sports News)

Paris represents the final opportunity for India to upgrade their single women's quota place to team invitations in Japan as India would look to qualify a second and third recurve archers to join the Deepika who is all set for her third successive Olympics.

How to watch Archery World Cup Stage 3: Live stream on www.archery.tv and https://www.youtube.com/c/WorldArcheryTV

All they would have to achieve is finish among the top-three in a field of 28 teams which include heavyweights Colombia, Denmark, Italy, Spain, Turkey and Mexico, which gave India a stiff challenge in the World Cup final in Guatemala City.

Less than two months after they lost the final in an intense shoot-off in the first stage of the World Cup, the Mexican team of London Olympics silver medalist Aida Roman, Alejandra Valencia and Ana Vazquez will again stand in their way.

Of the 28 teams, four teams will be eliminated from the qualification round while the top-eight will directly make the quarterfinals as world number three Deepika along with southpaw Ankita and teenager Komalika would look to start well.

In their last attempt, Indian women's team had failed to qualify, losing to Belarus 2-6 at the World Championships in Den Bosch, the Netherlands two years ago, while the men's team had secured the first quota.

Since then India made a solitary change with Ankita making the cut to the team and it worked well as they won the World Cup first stage -- the women's team's first gold medal since Wroclaw-2014.

In the women's section, India so far have an individual quota secured from the Continental Qualification during the Bangkok Asian Championships in November 2019 as India number one Deepika is already bound for her third successive Olympics.

So the pressure will be evident for the less experienced duo of Ankita and Komalika.

"Of course we are under pressure," 19-year-old Komalika said after Friday's practice session.

Incidentally, at the same Stade Charléty, Deepika had clinched one of her four World Cup Final silver medals in 2013 and the former world number one is confident of a good show.

"Technically, we all are up there but all it takes is to shoot with a calm, uncluttered mind, without doubting your abilities," Deepika told PTI.

"A bit of pressure is good to bring out your best. We are confident of making it."